General Hospital Spoilers: Can Nina Clay Be Alive – Did Madeline Lie To Silas and Nathan About Her Death? 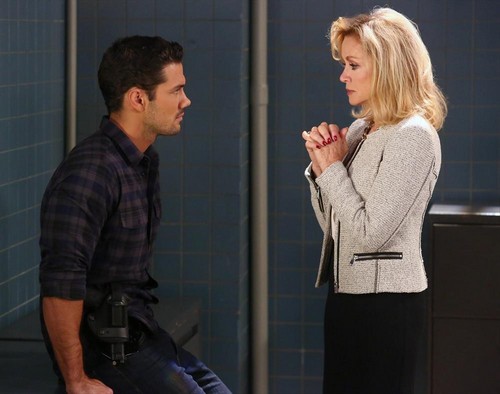 Casting calls for soap operas are always a great spoiler source, and can give you some insight as to where the writers are taking certain storylines, and General Hospital is no exception. We couldn’t help but notice that General Hospital put out a casting call for a Caucasian in her mid-40s who is “strong and fiery underneath her frail presence.” Let’s pretend for a moment that Nina Clay didn’t allegedly die. She would be a Caucasian woman in her mid-40s and seeing as how she was in a coma she is most likely pretty “frail” looking at the moment.

Madeline (Donna Mills) informed Silas that his wife Nina Clay was dead, and used that as leverage to get him to sign over the money she had left him in her will. But, what if Nina never died and Madeline was just desperate for the money, she had mentioned to Nathan that her husband and his Dad (who we know know isn’t his Dad) had cut her off.

Also, GH spoilers tease that on May 1st before Madeline heads to New York to face the murder charges of Nina and Dr. Nakumara, she reveals a huge secret to Nathan- and it also sends Sam and Silas into a tailspin. If Madeline reveals to Nathan that his sister Nina is alive, then that secret would definitely effect Sam and Silas’s relationship. Not only is he still married, but his wife is very much alive!

The casting call mentioned above is a big clue that we will be seeing someone new soon on GH. Since Madeline is a big liar with many secrets it would not be impossible for Nina Clay to be alive. Stranger things have happened in Port Charles!