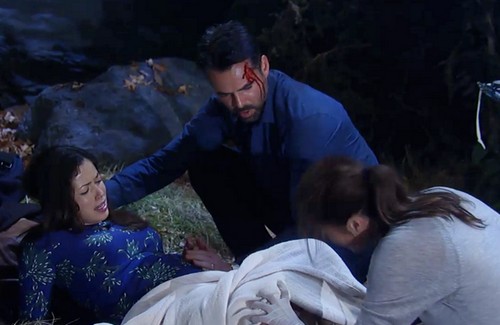 The week of April 28th – May 2nd will be paving the way for General Hospital’s May Sweeps and the soap opera’s highly anticipated Nurse’s Ball. The residents of Port Charles have been through a lot lately and they could definitely use a drama-free week, but according to General Hospital spoilers this will not be that drama-free week.

Patrick, Sabrina, and Emma’s car accident set the stage for several storylines for the week of April 28th-May 2nd. Patrick and Sabrina will watch over their baby at the hospital, in hopes that the premature baby will make a full recovery. General Hospital spoilers tease that Patrick will begin acting erratically after the accident (well, more erratic than before), and will begin trying to contact his wife Robin, even though he knows she is busy abandoning him and trying to save Jason Morgan’s life.

Madeleine, formerly known as Magda, (Donna Mills) swooped into Port Charles like a bat out of hell and dropped bombs left and right on Nathan, Silas, and her long-lost sister Liesl. And, according to GH spoilers she will leave just as loudly as she arrived, and creating as much collateral damage as possible. Donna Mills will exit General Hospital on May 1st ( CDL reported that she would be leaving) when her character Madeleine is shipped to New York to face the murders of Dr. Nakumara and her daughter Nina Clay. However, before Madeleine leaves she will reveal one last shocking secret to her son/nephew Nathan, and rumor has it the secret is so huge it not only throws Nathan for a loop, but rains on Sam and Silas’s parade as well.

Also during the week of April 28th-May 2nd Carlos will make a confession and the Port Charles Police department will gear up to make another arrest in the murder of AJ Quartermaine. Morgan, still furious that he was betrayed by Ava and his father Sonny, pays Julian Jerome a visit and fills him in on some interesting Port Charles gossip. Lulu and Dante will pressure Scott to drop the charges against Liesl Obrecht so that they can get their other embryo, which she is holding on to as an apparent bargaining chip?

Surely every GH fan is racking their brains trying to figure out what secret Madeline still is keeping from Nathan? And, how does Madeline and Nathan’s secret effect Silas and Sam? Was there even more baby switching going on than GH fans predicted? Let’s not forget there is the possibility that Nina carried a baby to term while she was in a coma, and Silas could have a child running around Port Charles that he is unaware of. Share your thoughts and theories in the comment section below and don’t forget to check CDL tomorrow for more General Hospital spoilers.

It’s a shame that Donna Mills quit the show. But as we reported it seems that a combination of her poor reception by the cast (jealous!) and the rough workload was not what she had anticipated. Some fans found that Donna’s portrayal of Madeline fell short of their expectations. What did you think?