Yesterday on General Hospital Dr. Liesl Obrecht and Madeline West were both arrested and thrown into jail cells at Port Charles Police Department. At the end of the episode it was revealed that Liesl and Madeline actually knew each other. No one seen that coming! Today on General Hospital we learned the two trouble makers aren’t just acquaintances, they are actually sisters! Magda Westborne was Madeline’s original ‘real’ name. Just when we thought General Hospital couldn’t get any more insane or twisted, another shocking revelation was made. Not only is Dr. Obrecht Madeline’s long lost sister, she is actually Nathan West’s biological Mom!

So, why did Madeline raise Nathan as her own son? Liesl is obviously capable of raising a child, she kept Britt alive until she was old enough to fend for herself. As far as we can see it, there are two logical explanations as to why Madeline raised Liesl’s son Nathan (AKA James). The first possibility is Nathan and Britt were actually twins and Madeline stole Nathan from Liesl to protect him from Faison. Britt is Faison and Liesl’s daughter, Faison is Port Charles’ very own villain and criminal mastermind. It has been referenced a few times on General Hospital that Faison had hoped Liesl would give birth to a son, so that he would have an heir. Madeline may have stepped in and taken Nathan before Faison knew he existed to protect him, knowing he would have no desire to sink his evil claws into Britt because she was a girl.

The second most logical explanation as to why Madeline would raise Nathan is that he wasn’t Faison’s son. It was recently revealed that Leisl and Victor Cassadine had an affair back in the day, there is a good chance that Victor may have been Nathan’s biological father. In order to keep their affair a secret from Faison, Liesl could have pawned Nathan off on her sister Madeline.

Regardless of who Nathan West’s father is, there is no question that Liesl is his mother, and that would make Britt his sister. A Britt and Nathan hook-up would have been almost cute and unpredictable, but now it’s downright disgusting – even illegal! A spoiler video was released for tomorrow’s episode and it shows Britt and Nathan meeting each other in a bar and getting drunk together, and going home together, which is wrong on so many levels. 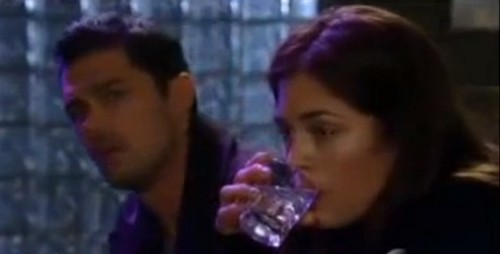 So, General Hospital fans were you as shocked as we were to learn that Dr. Obrecht is Nathan West’s mother? Who do you think his father is, Victor Cassadine or Cesar Faison? Another aspect to these revelations is that they indicate that the producers are trying their best to keep Donna Mills around as Madeline. Rumors in the industry broken online by CDL exclusively are that Donna isn’t too happy with life on GH is thinking of leaving. But with today’s info it seems that a large and robust storyline is here for Donna of she wants it. Do you think Donna will stick with the show? We’ve heard that some of the GH cast hasn’t behaved in a very welcoming manner as would be expected in a competitive industry with limited screen-time. Let’s be real here – a new star coming onto a show is going to cut into someone’s relative importance and nobody is going to be comfortable with that.  Share your thoughts and theories in the comment section below and don’t forget to check CDL tomorrow for more General Hospital spoilers.