General Hospital Spoilers: Will Dr. Patrick Drake Botch AJ Quartermaine’s Surgery and Cause His Death On The Operating Table? 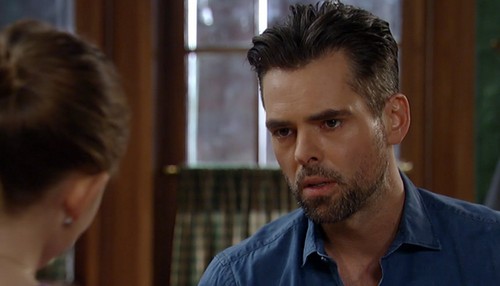 There is so much drama in Port Charles, it really is a miracle that the General Hospital doctors, nurses, and hospital staff are able to put their personal problems aside and save any lives. Dr. Patrick Drake has recently become unhinged since his wife Robin abandoned him and his daughter to try to save Jason Morgan. Last week on General Hospital he lost his temper and screamed at his daughter, and today he snapped and smashed a photo of Robin.

AJ Quartermaine has been fighting for his life on General Hospital, and clinging to life support machines since Port Charles mob boss Sonny Corinthos shot him. Since AJ was shot, his son Michael learned that he was his medical proxy and had to make a difficult decision regarding his father’s future. Michael opted to have Dr. Patrick Drake do an extremely risky and dangerous surgery that could potentially save AJ’s life, or leave him brain damaged or possibly even dead.

Can Patrick pull it together and pull off the risky surgery, despite all of his personal woes? Elizabeth doesn’t seem to think so, she even encouraged Patrick to sit this surgery out and call a different doctor in to perform surgery on AJ. Patrick didn’t want to hear it though, he is determined to keep working, and not let Robin abandoning him effect his work.

Today we learned that Sean Kanan, the character that plays AJ Quartermaine, will be leaving General Hospital to return to Bold and the Beautiful, and AJ Quartermaine will be written out of GH. We all know when a character is “written out of” a soap opera, they usually are killed off. Considering AJ has already survived multiple attempts on his life, it seems ironic that he will die during the dangerous surgery that Patrick is about to do on him. AJ’s death will also clear up loose ends for Ava Jerome and Sonny Corinthos, if Patrick botches AJ’s surgery and loses him on the operating table, then Ava and Sonny won’t have to worry about going to prison for the crimes that they have committed.

So, General Hospital fans, do you think Patrick will botch AJ’s surgery and lose him on the operating table because he is so distraught over Robin leaving Port Charles? Do you think that is how the GH producers plan to write AJ Quartermaine (Sean Kanan) out of the soap opera? Share your thoughts and theories in the comment section below, and don’t forget to check CDL tomorrow for more General Hospital spoilers.