General Hospital Spoilers March 17- 21: The Truth About Britt’s Baby Revealed: Will She Give Ben Back To Lulu And Dante? 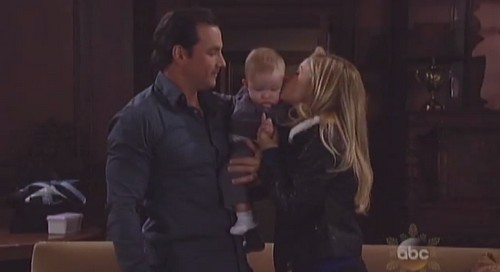 When Britt stole Lulu and Dante’s fertilized egg and impregnated herself with it, she really had no interest in being pregnant, she just wanted to win Patrick back. However, once she gave birth to Ben her maternal instincts kicked in and she became determined to keep him for herself, even though he technically isn’t her baby. It was revealed last month that Dante was actually Ben’s father, Britt explained that her mother Dr. Olbrecht used Dante’s sperm to get her pregnant unbeknownst to her.

This coming week on General Hospital, the other half of Britt’s secret will come out, just in time for her engagement party! According to General Hospital spoilers, Elizabeth is the one who finally puts two and two together and realizes Ben is actually Lulu’s son, and Elizabeth is probably the last person in Port Charles Britt wanted to figure it out. Elizabeth has made it very clear that she wants Nikolas back, and Britt’s dirty paternity secret will be the ammunition she needs to break them up.

Also next week on General Hospital, Detective Nathan West’s true motives will be revealed. Sam had a suspicion the Nathan had ulterior motives for trying to charge Silas with his wife’s attempted murder, and it turns out she was dead right. Next week we will find out how Nathan West knows Nina, and what his true intentions are.

Nathan and Britt aren’t the only Port Charles residents harboring huge secrets, but it looks like Ava and Sonny’s secrets will be safe for another week. Not only does AJ not wake up and reveal Ava and Sonny both tried to kill him (and Ava killed Connie), but his health actually takes a turn for the worst.

So GH fans, what do you think will happen when Elizabeth reveals Lulu is the mother of Britt’s son Ben. Lulu and Ben are going to go after custody of their son, and they have every right to, but how dirty will Britt fight to keep Ben? And, will this secret cost Britt her engagement to Nikolas. Share your thoughts and theories in the comment section below, and don’t forget to check CDL next week for more General Hospital spoilers.