General Hospital Spoilers: Will AJ Quartermine Wake Up and Tell Michael that Sonny Shot Him and Ava Murdered Connie – Are They On The Way To Prison? 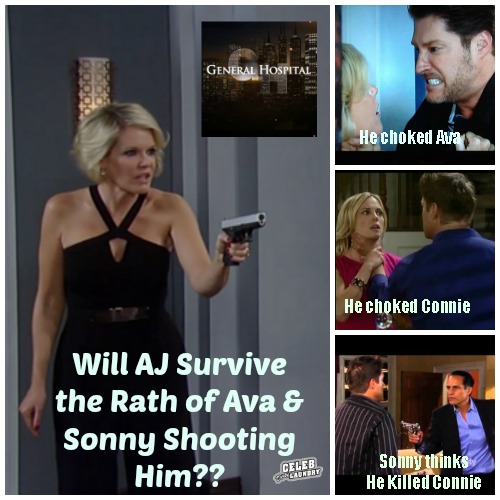 We’ve been watching AJ Quartermine fight for his life on General Hospital for the last week, after a near-fatal gun shot wound from Sonny Corinthos. Sonny, and Ava Jerome who was also present at the shooting, covered all their bases and secured airtight alibis. They also got lucky and the Port Charles police hauled Julian Jerome in for the crime, since AJ was shot in his apartment and he was found standing over AJ with the gun. There’s only one loophole in Sonny and Ava’s cover-up, they had not prepared themselves for what would happen if AJ survived the shooting and told the cops what really happened.

Today on General Hospital AJ regained consciousness for a mere two minutes, but it was long enough for him to tell his son Michael that Julian Jerome did not shoot him. Unfortunately, AJ suffered from a brain aneurism and slipped back out of consciousness before he was able to tell him that Sonny was actually the shooter.

Sonny has been sitting at the hospital since AJ was brought in, waiting to see if he survived. Sonny actually raised AJ’s son Michael, and he promised Michael that no matter what happened he would never avenge Connie’s death and kill AJ. (Sonny still has no idea that Ava Jerome is actually the person that shot and killed Connie, not AJ.) If AJ does pull through and pinpoints Sonny as the shooter, Michael will surely cut Sonny out of his life for breaking his promise and nearly killing his biological father.

It’s hard to believe, but Ava actually has more to lose than Sonny if AJ Quartermine survives the shooting. AJ will surely tell the Port Charles police that Ava actually is the one that shot and killed Connie in cold blood. Ava will lose the alliance she just formed with Sonny for sure, and the last person in Port Charles that she hasn’t burned – Sonny’s son Morgan. AJ has already been tried and let off the hook for Connie’s murder, but Ava can definitely still be charged for the crime.

In General Hospital spoilers for this week, Ava takes her henchman Carlos aside and gives him an order, and it has been teased that AJ will receive an “unexpected visitor” in his hospital room. There is a good chance Ava sends Carlos to take out AJ while he is still unconscious in the hospital, before he gets a chance to wake up and spill the beans on Ava and Sonny.

Do you think Carlos and Ava will take out AJ Quartermine before he wakes up and tells the cops what really happened to Connie and who shot him? Or, will AJ wake up and tell the truth and put Sonny and Ava behind bars? Let us know what you think will happen in the comment section below, and don’t forget to check CDL tomorrow for more General Hospital spoilers.