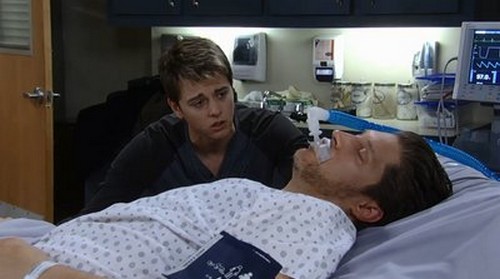 General Hospital’s Port Charles residents are still reeling from the latest shooting, but that doesn’t mean the week of March 10th-14th will be short on excitement, quite the opposite actually. According to the General Hospital spoilers released today, the town of Port Charles will be full of mystery and as always, a healthy dose of drama.

March 10th – 14th on General Hospital AJ will continue to fight for his life after his confrontation with Ava Jerome and Sonny Corinthos. Anna and Dante will be relentlessly trying to solve the case, while Duke struggles with whether or not he should share information he received with Anna. Sonny will be overcome with guilt when he witnesses Michael holding vigil at his Dad’s deathbed, and will have to deal with the great possibility that Michael will find out the truth and disown him. Meanwhile, someone in Port Charles will sneak into AJ’s hospital room and try to finish him off once and for all. Poor AJ, there is more than one person with a strong motive to kill him!

Next week on General Hospital Britt will finally share the happy news of her engagement to Nikolas with her Mom Dr. Olbrecht. Her happiness may be short-lived though because Lulu is losing sleep at night dreaming that Ben is actually her son, and it will only be a matter of time before the truth behind Ben’s DNA comes to the surface.

Alexis referred Julian Jerome to her ex-husband Ric Lansing as a legal client, it turns out Ric and Julian are already acquainted though, and next week on General Hospital we will find out Ric and Julian’s history. A lot of GH fans speculated that Ric Lansing was Julian’s secret bankroller, and from the looks of the General Hospital spoilers for next week they may have been right. But, will Ric and Julian have to out their partnership and reveal that Ric was meeting with Julian at the dock during the shooting in order to keep Julian from being charged with AJ’s shooting?

Also next week on General Hospital Ric will make Liza an offer, and Sam will continue to try to get to the bottom of the case of Silas’s disappearing comatose wife. Do you think AJ will pull through and be able to tell the Port Charles police what really happened at the Jerome residence, before another hit is taken out on him? And, what are your theories regarding Julian and Ric’s mysterious connection? Leave your thoughts in the comment section below, and don’t forget to check CDL this week for more General Hospital spoilers.