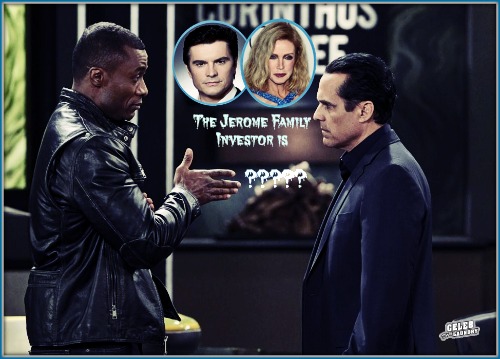 The feud between the Jeromes and the Corinthos is heating up this week on General Hospital. Ava made a huge move and handed over all of her brother Julian’s computer files to Sonny (to prove that she wants to switch teams and join forces with the Corinthos). After analyzing Julian’s computer files, Sonny made a shocking discovery. It turns out Julian and the Jerome Family are not acting alone, they have a silent partner that is bankrolling their organization. Ava claims to have no idea who her brother’s bankroller is, she was completely unaware that her brother had a silent partner/investor.

General Hospital revealed a teaser video, promising that the identity of the “secret king pin will be unraveled this week.” GH fans are going insane racking their brains trying to figure out who the secret kingpin could be that would financially support Julian and his family. There are two popular theories being tossed around as to who the bankroller could be.

It was recently learned that Rick Heart would be returning to General Hospital as Ric Lansing. Ric’s mischievous character left Port Charles in June of 2009, but he promised he would be back. Ric Lansing is Sonny’s half-brother, and nemesis. It would make perfect sense that he has been bankrolling Julian, in hopes Julian would take down Sonny. Julian has been doing a pretty poor job of taking down Sonny recently, which would explain why Ric has decided to return to Port Charles. He obviously needs to take care of Sonny himself.

Some GH fans think that it would be too obvious for Ric Lansing to be the “secret kingpin” behind the Jerome family. Another popular theory is that the new character that is coming to Park Grove this week may be Julian’s bankroller. It was recently announced that actress Donna Mills would be joining the General Hospital cast as a “Special Guest Star.” The GH producers have been very careful about leaking information about her role on the show. Generally when an actor or actress lands a role on a TV show, it is at least announced what character she will be playing. Since, the GH producers have been so secretive about Mills’ new role, a lot of fans think they may be introducing a new character as Julian’s bankroller, played by Donna Mills.

So, General Hospital fans, who do you think Julian’s “secret kingpin” and bankroller is? Could it be Ric Lansing? Or a completely new character played by actress Donna Mills? Let us know your theories in the comments below.