General Hospital Spoilers: How Dirty Will Britt Fight To Keep Ben From Lulu and Dante 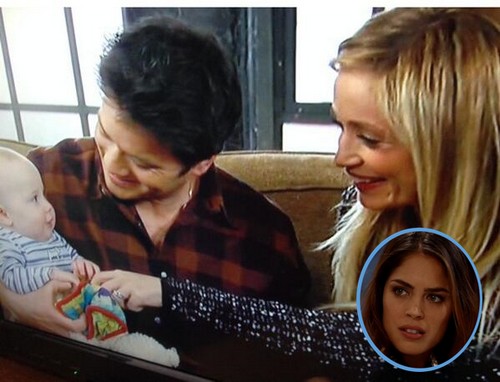 General Hospital fans have been waiting since Valentine’s Day for the other shoe to drop, and the other half of Britt’s secret to finally surface. Britt confessed to Nikolas that Ben was actually the son of Dante, and claimed that her Mom, Dr. Olbrecht had used his sperm sample unbeknownst to her. In a shocking twisted, Nikolas bought her story- hook, line, and sinker, and proposed to her.

Britt and Nikolas could almost live happily ever after, if it weren’t for the fact that Ben is not only the son of Dante, but also the son of Nikolas’s sister Lulu! Britt neglected to tell Nikolas that not only did her Mom steal Dante’s sperm, she stole the specimen after it had fertilized Lulu’s egg, and implanted it inside Britt. So, basically Britt has no relation to her son Ben, she was just his surrogate mother.

There is no doubt in any one’s mind that once Lulu realizes that Ben is her son, she and Dante are going to fight tooth and nail to take him from Britt. Lulu and Dante struggled through heart-wrenching fertility problems, and want nothing more than a baby of their own. And, unbeknownst to them, they have one, Ben.

When Britt originally schemed to become pregnant with the illegal assistance of her Mom, Dr. Olbrecht, it was a desperate act to get Patrick back. She didn’t even want a baby, she just wanted Patrick! Sure, once she gave birth to Ben her maternal instincts kicked in, and since she became a mother we have seen a much more mature and kinder side of her, but that still doesn’t make it right.

Now that Britt has raised Ben since he was born, she has no intention of giving him up to his real parents. Lulu and Dante are in for the fight of their lives trying to get that baby back from Britt! And, we all know Britt is very capable of “fighting dirty,” that’s how she wound up pregnant with their baby in the beginning.

What lengths do you think Britt will go to in order to ensure she doesn’t have to hand Ben over Dante and Lulu? Even though Britt in 100% in the wrong, do you still feel a tiny bit sorry for her? Share your thoughts in the comment section below, and don’t forget to check CDL tomorrow for more General Hospital Spoilers.