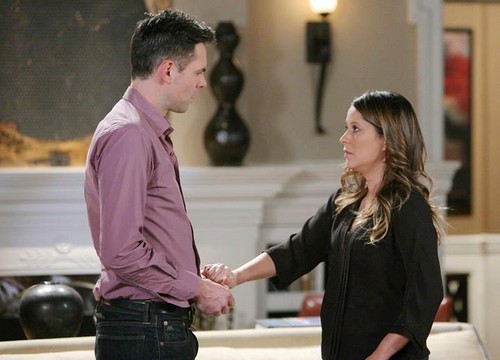 General Hospital fans have known for a while that Robin and Patrick’s reunion in Port Charles would be short lived, that doesn’t mean that they are happy about it though. Dr. Robin Scorpio was reunited with her husband Patrick and daughter Emma after being held hostage on Cassadine Island for nearly two years, GH fans were thrilled when the popular couple got back together.

Shortly after actress Kimberly McCullough returned to Port Charles as Dr. Robin Scorpio, it was revealed that she had only signed a 5 month contract, so fans knew the happy reunion would be short lived. Sure enough Victor Cassadine approached Robin shortly after her return to Port Charles and revealed that her old flame Jason Morgan was actually alive and needed Robin’s help. Robin has the opportunity to save Jason, but she would have to leave Patrick and Emma behind … again.

GH fans are not happy with Robin Scorpio’s current storyline. Fans have watched Robin for a long time on the popular soap opera, and her character would never leave her husband and daughter to rush off and maybe save Jason. There is a good chance that Jason isn’t even alive, Victor Cassadine isn’t exactly an honest man, and he always has ulterior motives.

So, why are the GH producers writing Robin Scorpio out of the show, again? Kimberly McCullough, the actress that plays the role of Scorpio even offered to stay longer than five months, but she was told that they didn’t need her. Here’s what McCullough had to say in a recent interview regarding he time on GH, “Normally, when people come back to the show, it’s usually a year contract. But mine was only five months. I actually told [the powers that be] that I would extend it if they needed more time, but they had already written the story of Robin’s exit.”

Why do you think Robin Scorpio’s character is already being written out of General Hospital, after returning to Port Charles for only five months? Are you sad to see McCullough leave Port Charles again?