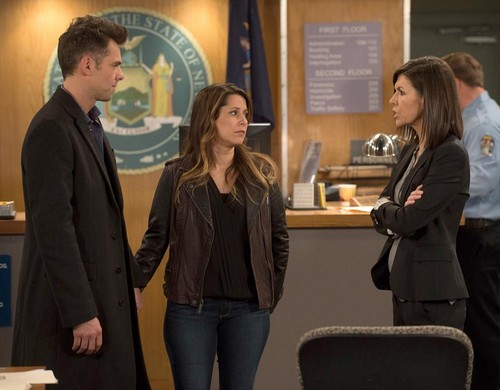 Most General Hospital fans were thrilled to have Kimberly McCullough back playing Robin Scorpio but when Kimberly came back she was on a six-month contract so she was never scheduled to stay.  Now that her contract is coming to an end there is a lot of speculation on how she will leave the show.  We know they won’t kill her off because Kimberly has said she is willing to return in the future and the door is open.  She said, “I feel like the most spoiled person because of that.  I am never going to say never.  I don’t know what is going to happen.  I don’t know if down the road there will be a time for me come back or if they want me to come back.  We’ll have to see what happens.”

So how will Robin bear to leave her family who desperately missed her for the two-years she was kidnapped by Jerry Jax.  It will have to be something very serious to have Robin leave her husband Patrick and her daughter Emma after just coming back to them.  But we can already see GH is setting the stage for her departure.

Nurse Sabrina Santiago the women that Patrick fell in love with while Robin was away is pregnant.  When Patrick found out she was having a baby Sabrina lied.  She claimed her former boyfriend and Julian Jerome’s henchman Carlos was the father of her baby and her future husband.

But lying to Patrick is killing Sabrina and at the end of last week Patrick’s daughter Emma overheard Liz talking to Sabrina about telling Patrick the truth.  So now Emma knows her father is Sabrina’s baby’s daddy.  So Sabrina is going to have to fess up to Patrick, after all she is not the type to keep secrets and not the type to lie and she does not do it well.  Add to this that Sabrina is just not going to be able to lie to Emma.  If Sabrina loves Patrick, she loves Emma as much if not more.  She knows the baby she is carrying will be a full brother or sister to Emma and she won’t be able to lie to her. So the stage is set for a Patrick/Sabrina reunion, easing Robin’s departure in terms of plot.

Meanwhile, Victor Cassadine is going to be instrumental in Robin’s departure from Port Charles.  Victor is going to offer Robin a job, he knows Robin is a brilliant scientist and he needs her scientific genius to bring his family back from the dead. Of course Robin is not going to be thrilled by the offer.  The last thing she wants it to leave her family again, she just got them back.

Victor makes her a tempting offer that is hard for her to refuse.  Victor also insists that if Robin accepts his offer she cannot discuss it with Patrick.  We know, since Kimberly is leaving the show for now she will accept the offer.

Now what could Victor offer Robin that would make her leave her family again?  The first and perhaps the most obvious reason could be that Victor tells Robin that he has a cure for aids.  Robin lost her first love Stone to AIDS, and then was diagnosed with HIV herself, so she would love a cure.

But since February sweeps are starting a far more plausible story line than a cure for AIDS would have Victor use Jason to get her to cooperate.  Jason comforted Robin after the death of her first love, Stone, and helped her realize that she could live a normal life with HIV.  They were romantically involved for some time but the separated – still the two remained good friends over the years and Robin has always been fiercely loyal to Jason.

Imagine if Victor has Jason and tells Robin if she finds a way to bring back Victor Cassadine’s relatives it will help Jason too.  The last we saw of Jason he lay on the edge of the pier, bleeding, motionless as Duke (Cesar Faison) kicked him into the freezing water where Jason disappeared!  The body was never found.

We know Steve Burton is not coming back as Jason Morgan, after being stolen by Jill Farren Phelps for The Young and the Restless, so does this mean that TPTB on General Hospital will be recasting the role?  We don’t know if this is going to happen but it would be a brilliant story line for February sweeps.

What do you think?  Will fans accept this as a reason for Robin to leave?  Thoughts?