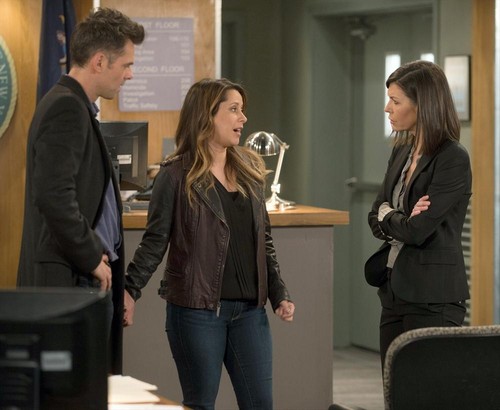 General Hospital seems to have more revolving and departing cast members than any other show on television, and really, that’s not much of a surprise. TV soaps already stretch credibility as it is, and to a long-running show like General Hospital, actors are as dispensable as napkins.

For example, it’s been reported that Kimberly McCullough will be leaving General Hospital – for the second time. Kimberly returned as Dr. Robin Scorpio Drake on a ‘short-term contract’ in September, but it looks her contract is already up. Kimberly told reporters at the ABC TCA party, “I only have two more weeks left. Next week and the week after.”

As for the reason that she’s leaving, Kimberly explains, “Robin’s leaving because of her love for another character that is not Patrick on the canvas. But it’s not goodbye. It’s just see you later.”

I’m thinking Kimberly’s not leaving just because of contract reasons, but probably also because of her participation in the ABC/DGA creative talent program. She’ll reportedly be shadowing a director on Grey’s Anatomy, and honestly, that job’s probably a lot more creatively fulfilling for her than playing a recurring character on General Hospital.

Still, it’s a little worrying to see how quickly General Hospital and other soap dramas hemorrhage actors. Obviously, they realize by now that the actors are not the draw, the show’s name is – and that’s especially true for a brand name like General Hospital.

What do you guys think about Kimberly’s departure from the show? Do you think she’ll be back? Let us know your thoughts in the comments.