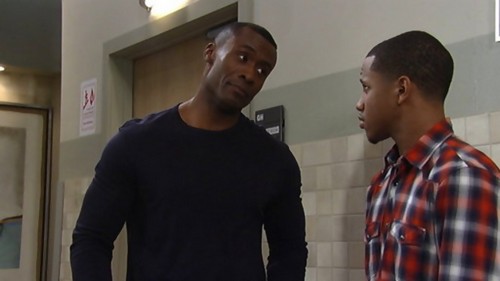 Okay don’t get excited!  I didn’t mean that Steve Burton is returning, I meant a recast of Jason Morgan.  If you are a huge fan of General Hospital like I am you want Jason Morgan back on General Hospital.  Jason has left a huge void with his absence on the show.  We know that Steve Burton isn’t coming back to GH anytime soon, since he is doing so well at The Young and the Restless since he was lured away by Jill Farren Phelps. I suspect they are going to recast the role, it certainly looks like they are setting the stage.

Remember February is sweeps month and the Soaps and most of television pull out all the stops to win.  Last year CBS for the first time since 1998 finished first in the most important category for advertising sales, viewers between the ages of 18 and 49.  So we can expect exciting things on all the ABC shows, ABC wants to be back on the top.

Here is the reason I think they are preparing for Jason’s return.  Currently Sonny has Shawn working for him as his enforcer but I’m wondering if that might change.  Since Shawn’s ward T.J. was involved in the shoot-out at Sonny’s warehouse, Shawn has been worried about the teen.

Shawn is afraid that Julian Jerome is going to come after T.J. and he warned T.J. to keep his mouth quiet about what he saw.  T.J. wants to go to the police and at the same time  T.J. is really upset that Shawn works for Sonny and would have shot Carlos if T.J. had not intervened.  Shawn tries to explain to T.J. why he does what he does.  Sean Blakemore who plays Shawn revealed, “Shawn does question if he’s not setting the best example for T.J.”

Meanwhile Julian is having T.J. followed to see if he is keeping quiet.  Shawn warns Julian Jerome that T.J. is off limits, but Julian is a lose cannon and there is no telling what he will do.

Shawn is going to have to decide if his loyalty to Sonny is worth losing T.J.  Sean and Sonny’s relationship is not the same as Jason’s relationship with Sonny was.  Jason was a truly devoted friend as well as a great employee. Shawn’s life does not revolve around Sonny – his loyalty is split between his boss and T.J.

Could this mean that Shawn and Sonny’s business relationship is about to be severed?  That would mean Sonny would need another enforcer and what would be better than to bring Jason back.