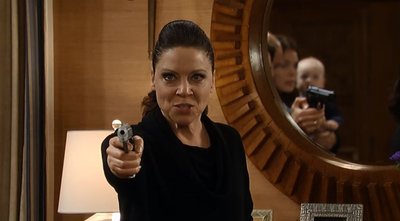 There is never a dull moment on General Hospital in the fictional town of Port Charles, GH fans are still reeling from last week’s shocking reveal, but it looks like there is plenty more drama in store for this week. According to General Hospital spoilers, here is a sneak peek of what fans can expect to see this week, April 7th-11th.

On Friday General Hospital fans learned that the person that was responsible for Nakumara’s death was not Ava, but actually Det. Nathan West’s mother Madeline played by Donna Mills. This week on general Hospital Nathan will confess to Sam that Madeline is actually his mother, and Nina is his sister. According to GH fans, Madeline will have a shocking secret of her own to share with Nathan.

General Hospital fans have been speculating for weeks about what Luke Spencer is up to, and whether it is really Luke Spencer or an imposter. This week on GH Sonny Corinthos will finally pick up on Luke’s odd behavior as of late and call him out on it. Spencer will fill Sonny in on the odd conversation he overheard in the stable between Luke and Julian during Liz and Nikolas’s engagement party.

Britt’s Mom Dr. Obrecht is still harboring Dante and Lulu’s baby Ben at Liz’s house. Nikolas puts two and two together and realizes that something is not right with Liz and heads back to her house. Obrecht pulls a gun on him and holds him hostage. According to General Hospital spoilers Britt will have a change of heart and has a “surprise” for Dante and Lulu. We don’t know for sure what surprise that is, but there is a good chance she tells them where her Dr. Obrecht is holding Ben. In a promo video for this week there is a shooting at Liz’s house when Dante arrives with Lulu and Britt in tow. Also according to General Hospital spoilers, next week something horrible will happen to Liz, and Ric and Nikolas will both rush to her side to be there for her.

So, General Hospital fans, what are your theories on the Luke Spencer storyline right now? Do you think the real Luke Spencer is stashed away somewhere in Miscavage, and there is an imposter running around Port Charles? Could Sonny Corinthos finally learn that Luke or his Luke-A-Like is the person that has been bank-rolling Julian Jerome’s organization? And, what about Dante and Lulu’s son Ben? Could next week be the week they finally are reunited with their son?

And, do you think Elizabeth could be shot and wounded during the altercation with Dr. Obrecht-why else would Ric and Nikolas both be rushing to her side? Share your thoughts and theories in the comment section below and don’t forget to check CDL later today and tomorrow for more General Hospital spoilers.