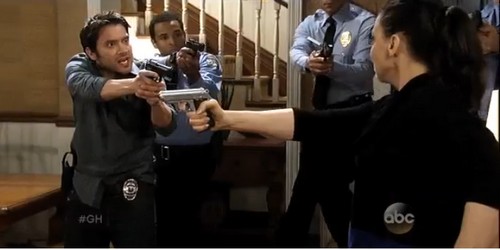 ABC recently released a spoiler video for the April episodes of General Hospital, and it looks like there’s a LOT about to go down in Port Charles next month.

For one, we can expect to see Kirsten Storms‘ Maxie Jones to return to Port Charles, and the video shows her hanging out with Detective Nathan West in a sweet little moment.

Of course, that’s nothing compared to what’s happening with Luke and his imposter. While we have a spoiler on who the possible Luke imposter could be but we are saving that for anther post. For now we see Luke (or his imposter) telling Sonny, “his plans for Port Charles are deadly.” What could he possibly have planned? Dun dun dun.

Then, there’s also an impending smack down between Sonny and Carly, where Carly has to decide whether to reveal that Sonny was the one who killed AJ Quartermaine. Considering that AJ is Michael’s biological father, Michael would obviously disown Sonny if he found out that he was responsible for his death. Carly only knows about this because AJ told her moments before he passed away, revealing that Sonny shot him because of Ava. But Carly is now faced with a very difficult decision, one that could potentially ruin Sonny’s relationship with Michael forever, plus put her in Sonny’s crosshairs. However, as much as she might not want to interfere between Sonny and Michael, she also wants to get some revenge against Ava, and this provides her with a strong incentive to tell. Now, it’s only about what she decides to do, which choice she makes….

Prior to the highlight of the month, at least in terms of action viewing, discussed below, Britt faces a dilemma. Dr. Obrecht will try to convince Britt to run away with baby Ben. Does Britt do the right thing and help Dante and the other authorities capture her crazy sociopathic mother who has kidnapped baby Ben, or does she give in to her id and fall under her evil mom’s spell once again?

Granted, none of these match up to the biggest moment of all, where we see what appears to be Dr. Obrecht holding a room full of people at gunpoint, including Baby Ben, Lulu, Elizabeth and her own daughter Britt. While we don’t get to see what happens in its entirety, we do see Dante and Nikolas attempt to stop Dr. Obrecht, but not before she manages to fire off a shot. We hear a scream right before the video cuts out, which means that someone was probably on the receiving end of that shot.  Who was it?

Now, there are several theories involved as to what’s up with Dr. Obrecht but people are speculating that Dr. Obrecht’s ultimate goal is to return Ben to Britt and allow her to leave Port Charles for good. Of course, does Britt take Ben and run or not? We won’t know either way until the episode actually airs. Either way, who do you think she manages to shoot? Who will be the unwitting victim of her shooting spree? Let us know your thoughts in the comments below.