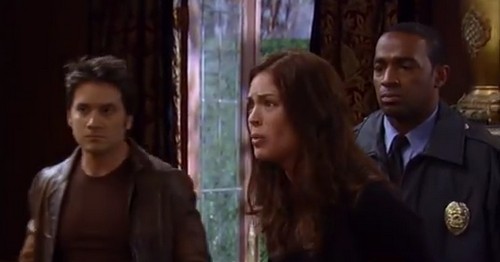 If you have been tuning into General Hospital, then I am sure you knew Dr. Obrecht was going to run away with Dante and Lulu’s baby before it even happened, just like every other GH fan. Although the kidnapping plot was totally predictable, in a surprising turn of events Dante Falconeri actually arrested Britt for stealing his and Lulu’s embryos and impregnating herself with them. It really is about time Britt and Dr. Obrecht are held accountable for their shady insemination procedure, and Dante made it very clear he will officially press charges against Britt if she doesn’t help him find Dr. Obrecht and his son Ben.

Today on General Hospital Dante handcuffed Britt and hauled her off to the police station. Britt pleaded with him and swore up and down that she didn’t know where Dr. Obrecht took Ben. Dante took her into an interrogation room and made her sit down and call her Mom to set her up. Britt agreed and left Dr. Obrecht a voicemail asking her where she had taken the baby, and claiming she wanted to meet up with them so that they “could be a family.” While Britt and Dante sat waiting for Obrecht to call back, Britt swore to help him find Ben and claimed she wanted nothing more than for him to be home and surrounded by people that love him, regardless of whether it was her or Dante and Lulu.

Tomorrow on General Hospital it will be the moment of truth. Dr. Obrecht was calling Britt’s phone at the end of today’s episode. Britt has two choices. She can make things right and trick her Mom into telling her where she has taken Ben so that Lulu and Dante can be reunited with their son. Or, she can tell her Mom to run… and take Ben far away from Port Charles so that Lulu and Dante can’t take him from her.

This really is a complicated situation. Sure, what Britt did was morally wrong. But, legally speaking, she gave birth to Ben, her name is on the birth certificate and she has raised him for the past six months. Although she did technically steal the embryos form the lab, she didn’t kidnap Ben because he wasn’t actually a living, breathing, baby yet. Still Britt has committed several crimes during the entire process initiated by her lovely mother.

Do you think Britt has any legal rights towards baby Ben? Do you think she will do the right thing and find out where Dr. Obrecht has taken him? Or will the old Britt’s true colors shine through, and will she encourage her Mom to run away with Ben? Is this Britt’s last chance to earn some respect back from Nik and just maybe save her engagement by doing the right thing? Could Nik forgive a repentant and remorseful Britt? Share your thoughts and theories on this controversial storyline in the comment section below, and don’t forget to check CDL tomorrow for more General Hospital spoilers.