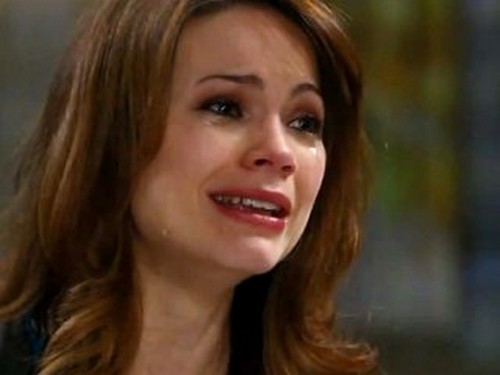 The drama on General Hospital is heating up as Nikolas Cassadine faces multiple betrayals from those he considered closest to him. As we know, Nikolas always assumed that baby Ben belonged to his fiance, Britt Westbourne, but he just discovered that wasn’t the truth. He realized that Britt lied and deceived him, but he also has to face another betrayal, this time in the form of Elizabeth Webber. It was because of Elizabeth that he found out about Ben’s true parentage.  But, he felt that Elizabeth could have handled the big reveal better than barging into his engagement party and telling all.

For those who haven’t been following the drama, here’s a little recap. Long ago, Nikolas professed his love to Elizabeth, but she didn’t reciprocate his feelings. Thus, Nikolas moved on, this time with Britt who was pregnant when he met her.  What Nikolas did not know is that Britt and her mother plotted together to steal an embryo from Dante Falconeri and Lulu Spencer, and she made herself the surrogate for the baby she was carrying.

Britt and Nik proceeded to get engaged, and Nik believed fully that baby Ben belonged to Britt. However, as Britt and Nik got engaged, Elizabeth realized that she has feelings for Nik and tells him that she loves him. Nikolas tells her that it’s too late, and that he refused to sit around, waiting for her to make up her mind.

Elizabeth, in a fit of jealousy, decides that she’ll do some digging on Britt to try to break up her relationship with Nik. Elizabeth managed to find out that Britt’s baby daddy was Dante and not an anonymous doner as Britt claimed.  Elizabeth did not realize at the time she only had half the truth. Liz confronted Britt about it, who admitted it was true but blamed her mother Dr. Obrecht.  Britt claimed that she did not know her mother stole Dante’s sperm.  Nik also confronted Britt about it, but he accepted her excuse. He went on to ask her if there was anything else she needed to tell him. She promised him that there were no more secrets.

Then, the engagement party comes around, and Britt is starting to feel incredibly guilty. She writes a long letter to Lulu confessing the full truth, but then she burns it. However, she burns the wrong letter, and the actual letter eventually finds its way into Elizabeth’s hands at the party by way of her son Cameron. Elizabeth, along with Ric Lansing, read the letter and realized that Lulu is baby Ben’s actual mother, not Britt. And she also realized that Britt and her mother stole the fertilized embryo and implanted it in herself.

Elizabeth, instead of telling Britt or Nik that she knew the truth, decided to tell Lulu at the party. As you can imagine, that caused a ruckus and Lulu confronted Britt about it demanding her son back.  Britt denied it of course and said there was no proof.  Elizabeth walked in with the letter she found as proof, and all hell broke loose.

In the aftermath, Elizabeth expects Nikolas to be happy that she revealed the truth, but Nik ends up going into a rage at her as well. He feels incredibly betrayed by Elizabeth, that she went through all this trouble to find out the truth and instead of telling him privately, went about creating such drama. He demeans Elizabeth in front of the whole party, telling her that this all feels like an elaborate attempt at revenge instead of an attempt at helping a friend.  He feels like it was a big, “I told you so” from Elizabeth, even though she did not mean it that way.

Obviously, Ric is really happy at this, because he’s hoping that Nikolas’ anger will then open the door for himself and Elizabeth. Unfortunately, Elizabeth is devastated that her plan backfired, and she’s also hurt that Nikolas is now furious at her for her involvement in everything. Will he ever forgive her? Right now, he’s pretty angry, but his anger is directed at Britt and Elizabeth.  Nicolas’s relationship with Britt is at the breaking point right now.  Who will he end up forgiving first, if he even forgives either of them? And is there a future now for Elizabeth and Nik, after everything that happened?

And things aren’t looking to rosy for Britt… or Ben, Dante and Lulu! Nik is furious with Britt and tells her the engagement is over, demands his engagement ring back and tells her she has to leave his house NOW… and he pushes her out of the room where the party was being held.

Meanwhile leave it to Dr. Olbrecht to kidnap Ben and take him at knifepoint after threatening to kill the baby. Of course Dante and Lulu let her go with Ben rather than risk their child being sliced up by deranged Dr. Obrect – a true King Solomon moment! Dr. Obrect says “I have let Britt down so many times, this time I am not.“

Once rejected Britt is shoved out of the party room sees Lulu and Dante who say, “Ben is gone.” Britt she screams “where” and the shocked couple say “Dr.Obrecht, your mother, took him.”

What do you guys think? How will this all play out? Let us know your thoughts in the comments.