General Hospital Spoilers March 24-28: Will Britt Lose Nikolas and Have To Hand Baby Ben Over To Dante And Lulu? (VIDEO) 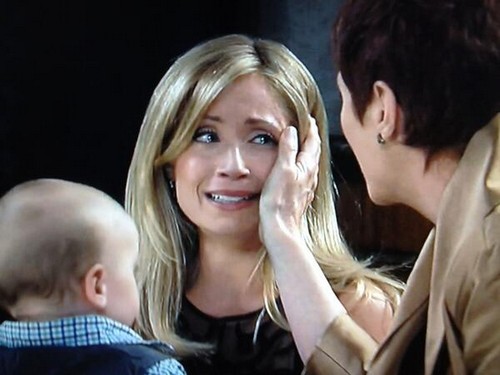 Britt and Nikolas’s engagement party is apparently the place to be in Port Charles, and will continue to be next week on General Hospital, March 24th-28th. GH fans knew it was only a matter of time until the engagement party went to hell, you can’t cram that many residents of Port Charles in one room and not expect some serious fireworks. According to General Hospital spoilers, here are some of the fireworks we can expect to see next week on the ABC soap opera.

Britt and Nikolas’s engagement party will carry on through the week of March 24th-28th, but by the end of the party Dante, Lulu, and Nikolas will know the truth about Ben. GH fans have known this time would come for weeks. But, it’s still kind of a gray area. Legally, Britt’s name is on Ben’s birth certificate, they can’t just snatch Ben out of Britt’s arms and take him home and live happily ever after. Britt did technically steal Ben from Lulu and Dante, but that was when he was still just a fertilized egg, so is it still considered kidnapping? It will definitely be interesting to see how this storyline plays out next week on General Hospital.

Next week on General Hospital a bizarre alliance will form. Detective Nathan West has had one goal since he arrived in Port Charles, to arrest Silas for the attempted murder of his wife Nina (who is also Nathan’s sister). Detective West seems almost obsessed with forming a case against Silas and making him pay for what happened to Nina, when any other cop would have let it go years ago. According to General Hospital spoilers that have been released, Nathan and Silas will both make shocking discoveries, and will end up teaming up and working together. Nathan and Silas working together? Hell really has frozen over….

Also on General Hospital March 24th-28th, Carly puts two and two together and figures out who shot AJ, and Kiki catches her Mom Ava trying to sneak into AJ’s hospital room again. Nikolas will reprimand Britt when he learns that she stole his sister’s baby, and then he pays Elizabeth a visit.

So General Hospital fans, what do you think should happen to baby Ben? Does Britt have any legal rights to the infant? She did steal the egg from the lab, but she also carried him for nine months, gave birth to him, and has cared for him since. Do you think Britt will do something crazy and try to run away with Ben before Lulu and Dante can gain custody of their son? And, what are your theories on Silas and Nathan West’s new alliance? Share your thoughts and theories in the comment section below and don’t forget to check CDL tomorrow for more General Hospital spoilers.