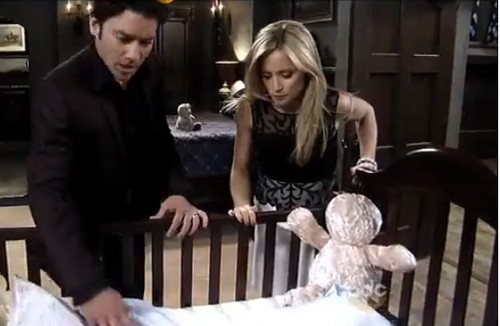 The truth is finally out on General Hospital, Dante, Lulu and the rest of Port Charles knows that Britt is not Ben’s biological mother. Last year GH fans watched as Lulu and Dante struggled to conceive and Lulu had her eggs frozen and considered finding a surrogate mother to carry her and Dante’s baby. Meanwhile Britt had her own agenda, and in a desperate move to keep Patrick interested in her, Dr. Obrecht (her mother) stole Dante and Lulu’s fertilized eggs and used them to impregnate Britt.

Recently it was revealed that Dante is Ben’s father, Britt explained that she had no idea Dr. Obrecht used his sperm to get her pregnant, and prayed that the rest of her secret never came out. Fortunately for Dante and Lulu, it did come out today, and now they know that Ben is their son and Britt basically is nothing more than a glorified surrogate mother.

Now that Dante and Lulu know the truth, they want nothing more than to take their son Ben home with them and live happily ever after, according to a General Hospital promo video that was posted on Facebook today, it is going to be much easier said than done. Especially if Dr. Obrecht has any say in it. When it was revealed at Nik and Britt’s engagement party that Ben was really Lulu and Dante’s son, Britt’s Mom Dr. Obrecht rushed out of the room with him and refused to hand him over to Lulu.  Dr. Obrecht said that Ben shouldn’t be exposed to all the screaming going on during the fight and she left the room with the baby. 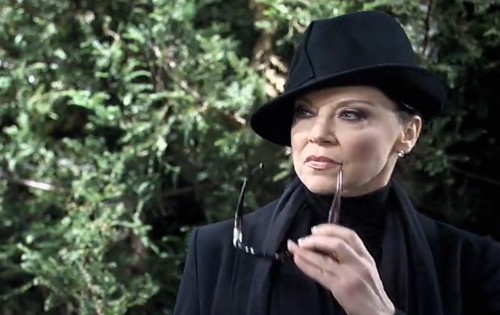 Dr. Obrecht will go to any extreme to keep her daughter Britt happy, she just pushed Brad off a balcony into a pile of hay to pressure him into keeping Ben’s DNA a secret, so who knows what other shenanigans she will pull to keep Ben from his biological parents.

Also on the General Hospital promo video, it is revealed that AJ Quartermaine may wake up this week, and tell Michael the truth about who shot him. Sonny Corinthos promised Michael he wouldn’t hurt his biological father AJ, and then in a heated moment he shot him anyways. AJ has been in a coma ever since, and unable to tell the police who shot him. If he wakes up and reveals his shooter, Michael will disown Sonny and never forgive him.

So General Hospital fans, what lengths do you think Dr. Obrecht will go to in order to keep her fake grandson Ben in her family? Do you think there is a chance she may run off with Ben and kidnap him, and deprive Dante and Lulu of the only child they are ever going to have together? Share your theories on what tricks Obrecht may have up her sleeve in the comment section below.