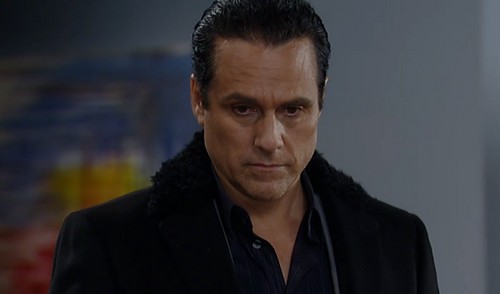 Dun dun dun. AJ Quartermaine was shot on General Hospital today, leading to a lot of questions on the situation surrounding the attempted murder. Leaving aside the question of whether AJ will make it, there are not a lot of people who know the truth about the shooting. AJ was shot by Sonny Corinthos, who thought he was saving Ava Jerome. Later, we learn how Sonny and Ava covered up AJ’s shooting, how she cleaned the gun and left it. While they’re walking on the docks, they discuss the matter in detail, and although Sonny is worried his son Michael who he promised he would not hurt AJ, Ava tells him that when the police find the gun, Julian Jerome will be the prime suspect.

However, we also saw Julian Jerome, Ava’s brother, secretly talking to someone on the docks earlier in the day, and Julian raises suspicion when he mentions that he had not told his sister that they were around because Ava’s loyalty was questionable. It’s not clear who this person is [although we have theories], but it’s likely that it’s Julian’s silent partner and/or financier. However, the kicker here is that he probably heard Sonny’s and Ava’s conversation on the docks, so he knows that they’re the ones who shot AJ, not Julian. Because this mystery person seems to everywhere all the time, he’s probably managed to dig up quite a few secret details on the residents of Port Charles.

Some people believe that this mystery person is Sonny’s brother, Ric. However, it’s also very likely that it’s the new character Donna Mills will be playing, who appears around late March. Because of Mills’ stature, there’s no way Mills will be playing a throwaway character, and giving her the secret role of Port Charles’ spy would definitely satiate her fans.

Anyway, it’s not just Port Charles that’s being spied on. In New York, Silas and Sam are having coffee, and Silas is discussing his wife’s absence from the hospital where she was admitted. And surprise surprise, someone’s listening to them as well. This mystery person is not revealed, but is it the same person? Are they connected? Port Charles in Upstate New York and New York City are very far from each other, but would that have stopped this mystery person from going to both places? Or are there two different spies working together?