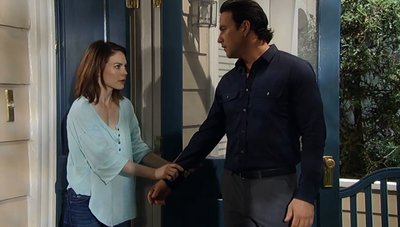 Last week was a big week for General Hospital, and this week March 31st – April 4th, the residents of Port Charles will still be dealing with the effects of last week’s revelations. According to General Hospital spoilers, the manhunt for Dr. Obrecht and Ben will continue, and a major break-through is finally made on Sylas’s wife Nina’s case.

Next week, March 31-st – April 4th, Nikolas’s guilt will take a toll on him, and he will pay Elizabeth a visit to try to make things right, completely unaware that Liz is in danger and Obrecht has threatened her. After Liz’s strange behavior while he is visiting her, he begins to sense that something is not right. But, will he figure it out before something horrible happens to Liz?

Last week on General Hospital AJ Quartermaine awoke from his coma for a couple of minutes before crashing again. However, he did manage to stay awake long enough to tell Carly that Sonny is the one who shot him. Now, Carly has a big decision to make. Should she do the right thing and reveal to Michael who shot AJ? Carly knows the odds of AJ pulling through this are slim, and her son Michael very easily could lose his biological father. Why put him through even more pain and reveal to him that Sonny, the man that raised him, actually killed his Dad? Sonny doesn’t deserve to get away with shooting AJ, but if it means sparing Michael more heart-break, Carly may just let him get away with it.

There are some major breakthroughs next week on Silas’s wife’s case, which throw Nathan, Sam, and Silas for a loop. Nathan learns that Silas’s alibi actually does check out. So, after some persuasion from Sam he agrees to arrange a sting operation to try to prove Ava is involved with Nakumara’s death. Sam and Silas were not prepared for what they help Nathan discover though.

Also next week on General Hospital Britt meets with her Mom Dr. Obrecht, and her Mom shares her plan with her to run off with Ben, and she wants the three of them to live happily ever after. Britt has to make a major decision. Should she run off with her Mom and Ben? Or, should she do the right thing and hand Ben over to his biological parents Lulu and Dante?

On top of all of the excitement next week, General Hospital will be celebrating their 51st anniversary on Tuesday, April 1st, and they episode will be packed full of some classic General Hospital flashbacks.

Do you think Britt will do the right thing and Ben over to Dante and Lulu, or will she make a run for it with baby Ben and Dr. Obrecht? What shocking discovery do you think Silas, Nathan, and Sam make in Nina’s murder case? And, should Carly tell Michael who shot AJ, or should she save him the heart-ache? Share your thought and theories in the comment section below and don’t forget to check CDL tomorrow for more General Hospital spoilers.