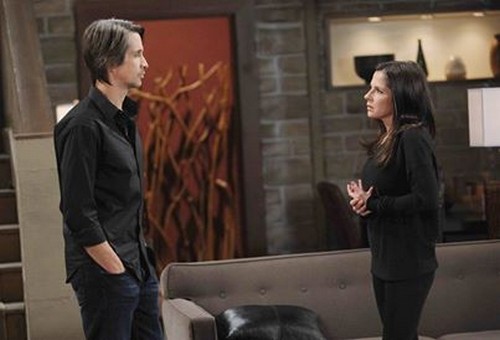 General Hospital’s majestic town of Port Charles is a lot of things, romantic, mysterious, dangerous, a little confusing, and… ironic. Sam helped her boyfriend Silas break into a maximum security hospital in New York City to see his comatose wife, who has supposedly been there for years, in a desperate attempt to help Silas clear his name. In a shocking, well a little predictable, but nonetheless shocking twist, Silas and Sam broke into her hospital room and discovered she was not in the hospital room. Meanwhile, unbeknownst to Sam, her thought-to-be-dead husband Jason Morgan was literally two feet away from her, frozen and comatose, in the room next door to Nina’s, where Victor Cassadine had stashed his body two years ago. Oh, the irony.

Silas’s wife Nina has been in a coma for over twenty years. Silas was having an affair with Ava while he was married to Nina, and when Nina learned of the affair it was believe she drank an overdose of liquid antidepressant and tried to kill herself.

She wasn’t successful though, instead she slipped into a coma. Recently an NYPD detective, Nathan West moved to Port Charles to investigate the cold case, where Dr. Silas Clay was the main suspect. Nathan is obsessed with Silas and is convinced he tried to kill his wife.

Silas is Nathan’s main suspect because at the time of her overdoes Silas was having an affair with Ava, Nina left her considerable fortune to Silas and the most damaging evidence was that a pharmacist named Mr. Nakimura claimed the anti-depressant Nina overdosed on was prescribed to Silas and not Nina.

Silas and Sam have been determined to find out who is framing him. The dynamic duo came to New York to question Mr. Nakimura but he ended up dead. Silas then decided to visit Nina, who by the way he has not visited in over 20 years. Nina’s parents had him barred from visiting her.

Well you can imagine Silas’ surprise when he and Sam managed to break their way into the high-security hospital and found she was not there.

Silas’s wife is either dead, moved to a different secret location, or has woken up and checked out. Some GH fans think that Nina may have woken from her coma months, maybe even years ago, and she is actually the one framing Silas, not Ava. General Hospital is infamous for its medical miracles, it wouldn’t be that far-fetched for her to miraculously wake up after twenty years and walk out of the hospital.

Speaking of medical miracles, Jason Morgan was presumed dead in 2012, after Cesar Faison shot him and pushed him into the lake. Victor Cassadine has some colleagues in a near bye boat drag Jason out of the water and had him vegetating for two years. Now, it is up to Dr. Robin Scorpio-Drake to save him, and bring him back to life. There’s always a catch when it comes to Victor Cassadine though. In exchange for giving Jason to Robin, Robin has to also work her medical miracles and patch up Stavros and Helena, a couple of Port Charles villains.

So General Hospital fans, do you think that Silas’s wife Nina has passed away and her family forgot to tell him? Or, do you think she is alive and well, and sneaking around Port Charles setting up Silas, trying to get revenge on him for sleeping with Ava twenty years ago? Why do you think Nathan is so obsessed with Silas? Could Nathan be related to Nina? Are you excited to see Jason Morgan semi-alive? How soon do you think Robin will have him up and at em’ and on his way back to Port Charles? Share your thoughts and theories in the comment section below!