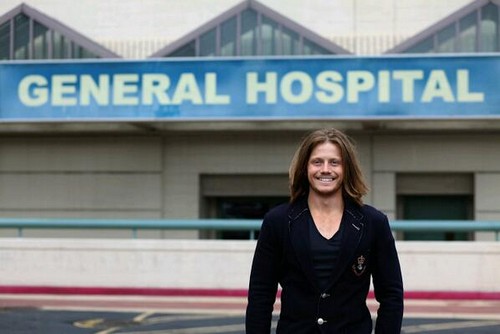 ABC has revealed that they have added another General Hospital character to the mix, and he will be arriving in Port Charles on Thursday, April 3rd. The new character who is known as Levi, will be played by actor Zachary Garred. If you are a fan of Australian soap operas, you may recognize Zachary from his previous role on “Home And Away.”

General Hospital producers are pretty tight-lipped about the character Levi, but we do know that the role is recurring and Levi is described as a “New Age Hippy.” And, rumor has it Levi may be a potential love interest for Port Charles’ very own Maxie (Kristen Storms). Storms has been on maternity leave since 2013, and GH writers wrote her character out by sending her to a spiritual retreat to “find herself.” After a series of tumultuous relationships and pregnancies, and being forced to hand her daughter over to Spinelli by a judge, Maxie left Port Charles single and alone. Considering Levi is a “New Age Hippy” and arrives in Port Charles around the same time as Maxie, it’s safe to assume they met each other at the spiritual retreat Maxie was at for the past few months.

So, General Hospital fans, are you excited for Maxie to return to Port Charles next month? And what role do you think Levi (Zachary Garred) will play in Maxie’s life? Share your thoughts and theories in the comment section below, and don’t forget to check CDL tomorrow for more General Hospital spoilers.