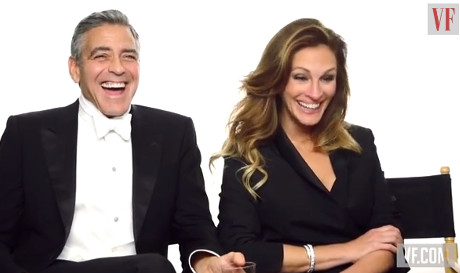 The 20th Annual Vanity Fair Hollywood Issue will have some stunning stars gracing its cover, including the legendary George Clooney and America’s sweetheart Julia Roberts. So what happens when you put these two icons together in a room and prep them for an arduous day of shooting? Well, like all sane celebs, they take tiny jabs at Gwyneth Paltrow who, bless her heart, has garnered a bit of a bad rep in Hollywood — and really everywhere else, too. It’s not that Gwyneth Paltrow is a bad person necessarily . . . she’s just a bit much to handle (and a whole lot to take in). I think celebs, especially her fellow A-listers, understand this.

When asked how they felt about being on the Vanity Fair’s 2014 Hollywood Cover, Julia and George spilled: “It’s cool,” says Julia, “Yeah.” George adds, “I think it’s going to be fun. That’s what Gwyneth Paltrow told me to say.” The two proceed to bust up laughing and Julia, being the funny woman that she is, grabs her cup and pretends to knock one back. “What the hell was that about? Why did I get pulled into that one?” George says of the comment, all while laughing. This jab at Gwyneth comes on the coattails of the MAJOR drama she’s had with this magazine for a while now.

You can watch the behind-the-scenes video to get the full photo shoot experience. The photo shoot was helmed by none other than Annie Leibovitz, the photographer any sane celebrity would bend over backwards (and further) for to be captured by her lenses.

What do you make of George’s weird statement regarding Gwyneth Paltrow and Julia’s jubilant reaction? Do you think these two longtime friends harbor a bit of sourness toward GOOP?