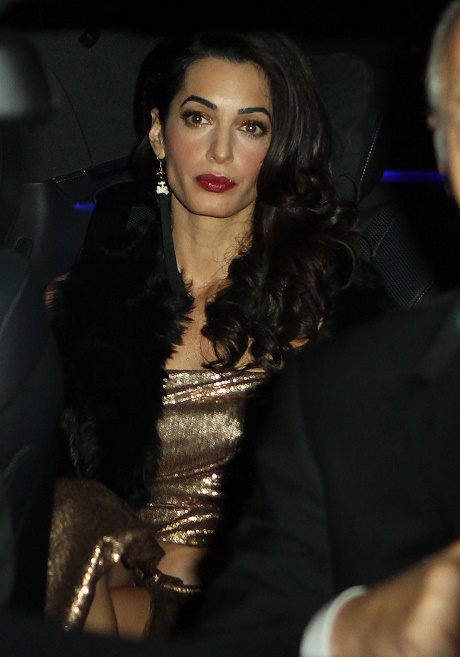 Amal Alamuddin has become a household name since her whirlwind romance with actor George Clooney and extravagant wedding. The world is fascinated by the woman who was finally able to tie down notorious bachelor Clooney, and even more intrigued by that fact that she is a high-profile lawyer and business woman, and not someone half Clooney’s age that he met at a Hollywood party. But, according to recent reports, all of the spotlight that is on Amal Alamuddin is slowly wearing down the recent bride – and having a negative effect on her health.

The November 10th edition of OK! Magazine reveals, “Since Amal Clooney was first spotted out with Hollywood’s most notorious bachelor in 2013, she’s gone from a barely known lawyer to a worldwide fashionista – one who worries that all eyes are on her waistline.” An insider dished to the magazine, “Amal became really insecure about her body after seeing photos of herself all over the place. She lost eight pounds before the wedding which definitely wasn’t necessary! With cameras now following her, even on business trips, she’s showing no signs of scaling back on her restrictive diet.”

We almost feel sorry for Amal. Over the course of a year she has become known worldwide and hasn’t had a second of privacy – which has to be stressful for someone who isn’t used to being in the limelight. But, c’mon – you married George Clooney! What did you expect? As far as losing weight, we have seen it time and time again in Hollywood. Celebrities are constantly trying to achieve the perfect appearance due to constant scrutiny.

What do you think of Amal Alamuddin? Is she really starving herself? What could she possibly need to change about her appearance – she landed George freaking Clooney? Or is this just another over-the-top tabloid story, and Amal is perfectly happy with her waistline? Let us know what you think in the comments below!