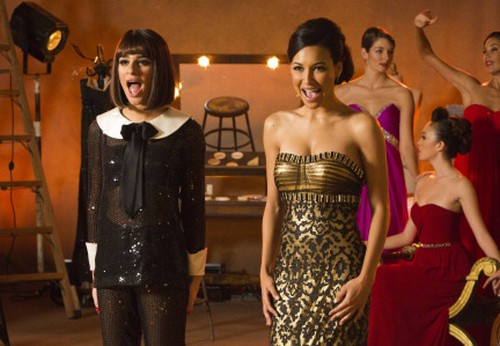 After a long hiatus Glee finally returns tonight with an all new episode entitled “PFrenemies.” If you missed the last episode before the hiatus, don’t worry your little Gleek hearts, because we recapped the episode for you RIGHT HERE. Glee season 5 episode 9 Tina and Artie compete against each other to be the class valedictorian.

On the last episode before the hiatus Sue Sylvester introduced the episode as a Christmas special that FOX did not allow to air from last year. The members of New Directions auditioned for roles in McKinley’s living Nativity Scene. Meanwhile in New York, Rachel, Kurt and Santana worked as Santa’s elves at a mall.

On tonight’s episode tensions flare in NYC as Santana auditions and snags the role of Rachel’s understudy in “Funny Girl,” causing a feud between the roommates. Meanwhile, back in Lima, Tina and Artie compete against each other to be the class valedictorian.

RECAP: The show starts off with Santana working at her restaurant, a woman starts asking her a question in Spanish not realizing that Santana can speak English. The woman wants Santana to take her food back because of the eggs, Santana sees Rachel and says that she hates her job. Santana is complaining and feeling guilty with complaining to Rachel. Rachel tells Santana that she will be on the cover of New York Magazine, Santana is happy for her. Rachel says that there are models that’ll be there, that Santana can get her hair done and make up done. Santana says that she hopes she can be as cool as Rachel and that she’s a good friend. Artie talks to Tina, saying that he’s happy that he’s glad that they can still eat lunch on Tuesdays together. Tina tells Artie that she’s in the waiting list for the school she wants to go to, that she wants to leave here and move on. Artie and Tina begin to sing “Whenever I Call You Friend” by Stevie Nicks, then the entire Glee club joins in near the end. Becky walks in and says that the principal wants to see Tina and Artie in her office, Sue says that they’re tied for valedictorian because of their perfect attendance and GPA. Sue says that Artie and Tina will have to compete for the spot of valedictorian, they’ll need to write their speeches and speak them out to a group of judges of her choosing. Rachel and Santana are at the photo shoot, Rachel is completely nervous. As Rachel walks away, Santana sings “Brave” by Sara Bareilles and Rachel also joins in. Turns out that the entire song was in Santana’s mind. Tina walks up to Artie and says that she wrote a speech for Artie, which says he has given up and will let Tina become valedictorian.   Tina is complaining to Artie about how he gets everything he wants, he doesn’t really care; they’re beginning to argue with each other. Tina ends up insulting his girlfriend by calling her the biggest bitch of the school, but Artie retorts with saying that she’s in fact the biggest bitch.

Blaine is talking on the phone with Kurt, Kurt feels that Eliot wanting to steal the spot light from him. Blaine says that he could be overreacting, but that he should keep his enemy close to him. Kurt tells Rachel and Santana that they need to practice as a band, Rachel says she’s busy and that it’s hard being a star clearly making it seem that she’s letting it all go to her head. Will wants to know who will lead the Glee Club this time, Tina nominates herself and then Artie nominates himself, so they end up having a sing off against each other. They both sing “My Lovin” by En Vogue. During the song Tina ends up pushing Artie over in his wheelchair, she apologizes and says she didn’t mean to. Artie says it’s fine, clearly pissed off and leaves after getting help back into his wheelchair. Kurt asks Eliot how long he’s been performing, Eliot tells him that he was on stage at the age of five for the first time. Eliot says that he started with singing lessons, then piano and now guitar. Kurt then asks to learn guitar from him. Kurt then says that if he wanted to become the leading man he could, though Eliot tells him that he should pick up a guitar to learn it. Rachel is sitting down waiting for people to be casted with the director, no one can sing at all so far, but Santana decides to audition. Santana enters singing “Don’t Rain on My Parade” by Barbra Steisand. The director is completely loving Santana’s voice and looks very pleased with what he sees and hears. The director is blown away with Santana’s performance and wonders where she came from, Santana explains how Rachel and her are roommates and that they went to high school together; he turns to Rachel and asks why she’s never mentioned Santana before and Rachel is speechless.

Eliot begins singing with Kurt “I Believe In A Thing Called Love” by Darkness while in a music store. Rachel is complaining to Kurt about Santana auditioning for Danny’s show. Santana says that she feels like Rachel likes having the one up on her, that she’s trying to prove all those who hated her wrong. Rachel says that Santana is the one who hates not being as great as Rachel is, Santana says that she’s been better than her and has always been better than her. Rachel ends up slapping Santana in the face and says that she should leave. Santana gets a call and it seems that she’s Rachel’s new under study.

Now the valedictorian speech off will begin, it’s a showdown between Artie and Tina. The judges will have to vote for who’s speech is better than the other. Tina is up first, she gives her speech that it’s about her beginning in the school and how she’s changed throughout her years; that Artie Abrams changed her. Tina and Artie both begin to give their speeches and in the end that they both say they decline to become valedictorian, and that the other should win. Sue says it was a waste of time and that she hates them both, now the judges need to decide who won. Santana arrives and is applying make-up, Rachel walks in and tells Santana to leave her room; they’re fighting with each other. Rupert finds them fighting with each other, and that he doesn’t want that to happen because he wants them to work as a team. If they work together they will become far more famous, that he doesn’t care about their past. Rachel watches Santana go upstairs to the washroom to go put on her make-up she then sings “I’ll Be Watching You” by The Police and Santana also joins in.

Eliot tells Kurt that there’s a great place they should go to, Kurt then says that he’s good at cooking. Eliot tells Kurt that he’s happy to meet Kurt because he’s the first gay friend he has who isn’t gay, Eliot says that he’s not trying to take over the band; that they’re all friends who are talented and should all work together. Kurt and Eliot end up taking a selfie together. Sue tells Artie and Tina that they aren’t the valedictorian, which Blaine will become it because he’s the third best in academics. Becky asks Blaine when he broke up with Kurt, after seeing a picture with Eliot and him together. Blaine says that Kurt and Eliot aren’t together, but feels a little worried.

Now they’re looking for someone for solos at nationals for the Glee Club, Blaine comes in and says he’s valedictorian because he will sing instead of make a speech. Blaine tells Artie and Tina that he understands how much they wanted it, that he wants to sing with the two of them and make sure they have solos. Rachel tells Santana that they can’t live in the same place anymore, Rachel feels betrayed by Santana. Kurt says he’s disappointed in Rachel not seeing how Santana deserves this chance, he wants to sit down and talk it out. Rachel decides that she’s going to leave now, she says that they’ve only been pretending to be friends for ever and that they’ll never become friends. Rachel says she will become a star on Broadway and won’t let anyone get in the way of it. Tina, Blaine, Artie and the rest of the Glee Club begin to sing “Breakaway” by Kelly Clarkson. While they’re singing it show Rachel packing and getting ready to leave, before she leaves she hugs Kurt and then rips a picture of her with Santana into pieces in Santana’s face before leaving.