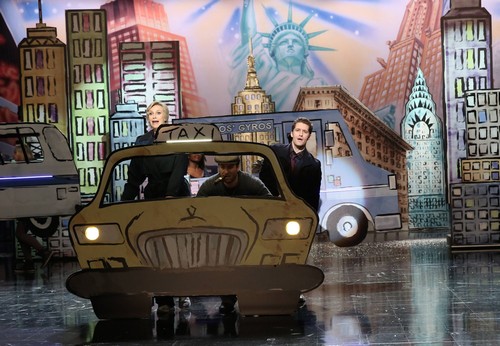 Glee returns to FOX tonight for an exciting new episode. In “Opening Night,” Rachel makes her Broadway debut in “Funny Girl.”  Rachel makes the mistake of Googling herself and reading the reviews of her preview.

On last week’s episode when the boys get tested for STDs, Artie tested positive for a disease and he was forced to tell his sexual partners. Blaine discovered his newfound love of “cronuts” has the residual side-effect of weight gain. Meanwhile, Kurt and Blaine have relationship issues when Blaine put on his “freshman fifteen.”  Did you watch last week’s episode?  We did and we have a full and detailed recap, right here for you.

On tonight’s episode the night has finally arrived for Rachel’s (Lea Michele) Broadway debut in “Funny Girl,” and she has very special guests in town to support her career-defining moment.  Will Shuester and Sue Sylvester who come into town to see Rachel’s musical.

In the days leading up to her big debut, Rachel goes into full panic mode. She’s having nightmares about being good enough. Early reviews came out and Rachel just had to read them. All the big names like her, but the bloggers and the comments sections are pretty harsh on her. So all of that pressure (and internet trolling) is sacking her more than healthy dose of self-confidence. It had gotten so bad that Kurt had to ohysically unplug her from the world.

No more internet for Rachel Berry!

However one of her biggest critiques is heading to town and thanks to Mr. Schuester – Sue Sylvester even has a ticket to opening night. Will couldn’t take Emma because of her advanced pregnancy and his other friends unfortunately couldn’t make it as well.

So Sue was his last choice although technically he didn’t choose her. She kind of invited herself. Sue wanted to see NYC and Will was too much of a gentlemen to turn her down.

Meanwhile in the city, Tina arrived in time to see Rachel’s show. She actually arrived a few days beforehand and yet for a “good” friend; Tina sure knows how to press Rachel’s buttons. She mentioned the time Rachel got laryngitis. And she also brought up the now infamous bloggers.

Up till then Rachel was doing really well with Kurt’s rule. Afterwards though she scoured the internet and read every hateful thing about herself in under an hour.

Rachel was in crisis mode and her friends did everything they could to convince her that she was going to be great onstage. They even forged a letter from The Barbra. But none of their attempts were able to get through to her. Then when Sue showed up at the apartment looking for a place to sleep – Rachel’s problems really hit an all time low.

Then Santana came back.

Santana made Rachel see how childish she was being. Everyone that has ever made it has also to deal with their share of criticism. The Great Barbra Streisand was told some awful things in her day, but look at her now.

Hearing that, Rachel decided then and there that she could do the play after all. All she needed to remember was that she had her friends and Mr. Shu there to support her. Well, minus a certain Mr. Schuester seeing as his wife went into labor prior to the first act. So he missed out on Rachel giving her best and he was also unable to stop Sue from nearly ruining Rachel’s performance.

Sue walked out in the middle of Rachel’s number. And not only could that have damaged Rachel’s performance, but the fact Sue had to climb over the New York Times Reviewer just to escape – made her insult that much greater.

Rachel was told by the producer that everything was going to be ok as long as she finished in the same fashion she started. If she allows Sue to shake her then their opening night might well be their closing night as well.

He left the play early too and Sue quickly joined him for an impromptu date. So at least she got the chance to experience that. Even if she left Rachel in a ditch!

Rachel finished with one of her best performances to date. And then all she wanted to do was hang out with her friends so Blaine suggested a place he knew. The place also happens to be full of Rachel’s biggest fans. So the guys had an awesome night dancing till dawn.

Yet when Rachel returned to her apartment she found Sue and Sue’s new boyfriend lounging around and the mystery guy was in Kurt’s robe. It seems Sue brought him back to the party for all-nighter which Rachel didn’t appreciate. Rachel tore into Sue with the harshest comments. And then she kicked the lovebirds out – they overstayed their welcome and possibly ruined several pieces of furniture.

The reviews from last night were out… and they loved Rachel! The reviews from the New York Times said she made the iconic role her own. While Will called tell the old gang his good news. He has a son – Daniel Finn Schuester.

The glee family is growing, but Sue’s paramour isn’t included in the new count. He’s a New Yorker and Sue loves her hometown. So their affair had to come to an end. She told him goodbye and flew back home. Though she did change her mind about the city. Sue used to hate even the idea of New York. And her guy got her to love the city.