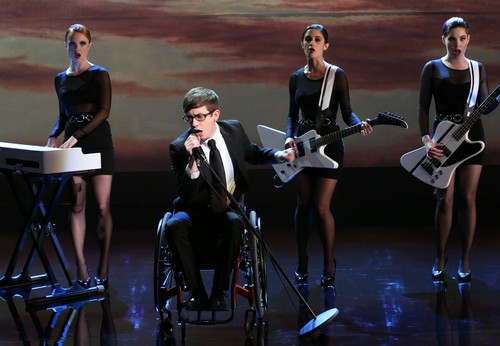 Glee returns to FOX tonight for an exciting new episode. In “Tested”  the guys get tested for STDs, and Artie learns that he’s contracted a disease. Elsewhere, Blaine’s weight gain puts stress on his relationship with Kurt.

On last week’s episode Rachel took the next step in committing to her role in “Funny Girl.” Meanwhile, Kurt was the victim of an attack because of his sexual preference.  Did you watch last week’s episode?  We did and we recapped it right here for you.

On tonight’s episode when the boys get tested for STDs, Artie tests positive for a disease and he’s forced to tell his sexual partners. Blaine discovers his newfound love of “cronuts” has the residual side-effect of weight gain. Meanwhile, Kurt and Blaine have relationship issues when Blaine puts on his “freshman fifteen.”

Artie is enjoying his New York experiences – possibly too much. He’s currently dating at least two women at the same time but whether they know about each other or not remains a mystery. And let’s not forget that Arties was still shopping to add to his collection. He was showing interest in a girl named Julie yet it never went anywhere after she turned him down. She’s pretty and sweet though she probably wasn’t the type to enjoy a foursome.

Artie believes himself to be “Addicted to Love” and yet he forgot there’s always a price for addiction. This time the price is an STD.

Sam had talked to the guys and he asked for their support in getting tested. He wanted to get himself checked because he wanted reassure Mercedes that he was clean. Mercedes is still a virgin so Sam though it was a big deal breaker for her.

Sam, Blaine, Kurt, and Artie were all tested, but it was Arties that got the call. The doctor informed him he had chlamydia. And when he told his friends – they didn’t take the news well. Sam in particular slut-shamed him.

The testing was his idea, but he honestly just thought it was going to be a formality. Even with Mercedes which as it turns out wasn’t the full truth. While Mercedes is glad that her boyfriend is clean – that doesn’t mean she’s ready to have sex. She needs more than a doctor’s note and that’s why she sought spiritual guidance. From her faith and from Rachel.

When Artie told his girlfriends; he received mixed reviews. As in one of the girls was completely freaked out and the other was more blasé about it than a normal would be be. Then again it’s easy to be blasé seeing as Jessica was kind of sure she was the one that gave Artie the STD in the first place.

So after a crap day – Artie’s dream girl decided to change her mind and asked Artie out. He said yes, but is he going finally start buying condoms or keep going without?

As for Blaine, he’s been eating. As a point of interest that’s all he seems to do nowadays. He eats and he tries to feed Kurt. Which Kurt sometimes takes as criticism because he’s been working out and getting fit.

So the guys sat down to talk. Blaine had felt insecure not because of Kurt’s popularity, but the way the popularity made his boyfriend stronger. Ridiculous? Maybe, but he saw Kurt come into his own and it made him scared about their relationship. What if Kurt gets to be so independent that he no longer needs Blaine?

Kurt promised him that won’t ever happen…although we’ll see.

Artie condom problem solved itself. He won’t be needing any contraceptive after getting dumped. Artie told his dream girl the truth and she was more disgusted by his sleeping habits than she was by the chlamydia. Artie was sleeping with two people at the same time and the girls he picked were idiots. So he showed his true colors by telling her the truth and she’s figured out he’s a sleaze.

Though Artie learned something during the excruciating encounter. He saw that he’s been treating women and sex too casually and he’s re-evaluating.

After much discussion, Mercedes has suspended talk about sex. She told Sam she wasn’t ready and asked him if he could wait. And for her he said yes. So not all the guys turned out to be sleazes.