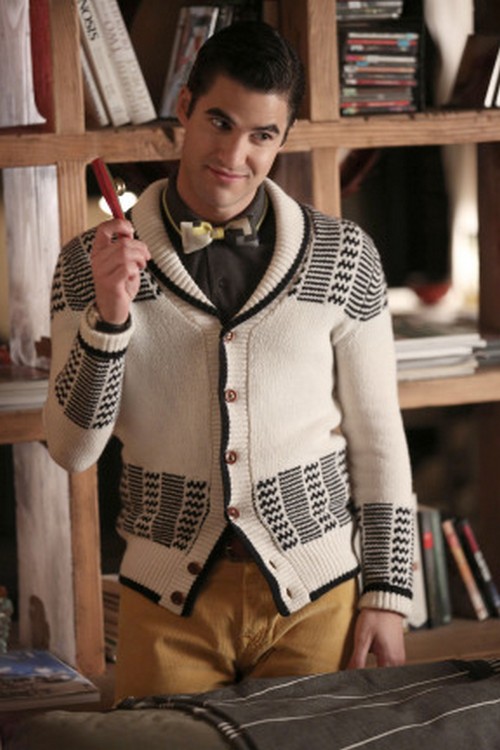 Glee returns to FOX tonight for an exciting new episode. In “Bash” Rachel takes another step toward committing to her “Funny Girl” role. Meanwhile, Kurt is on the receiving end of an attack.

On last week’s episode a few months after the end of the glee club, New Directions alumni were adjusting to their new lives in the Big Apple: Blaine and Sam had moved in with Kurt, while Artie experiences difficulties navigating the mean streets of Manhattan. Also, Rachel got accustomed to being a Broadway star, and Mercedes (guest star Amber Riley) moved to New York to work on her album.  Guest Cast: Amber Riley as Mercedes Jones; Adam Lambert as Elliot “Starchild” Gilbert.  Did you watch last week’s episode?  We did and we recapped it right here for you.

On tonight’s episode Rachel takes the next step in committing to her role in “Funny Girl.” Meanwhile, Kurt is the victim of an attack because of his sexual preference.

Tonight’s episode of Glee opens up to the old gang in New York singing a tearful rendition of “No one is Alone”. They did this in honor of their neighbor that was recently beaten up just for being gay. So this particular situation hits close to home for both Kurt and Blaine meanwhile Rachel is able to move on and passed it – she actually does this quicker than Kurt appreciates.

Rachel has school, work, and her shifts at the diner. That’s full plate for anyone and her director is already warning her not to overextend herself. So it’s no wonder that Rachel is choosing to look past a beating no matter how severe it was.

However Kurt didn’t like how she was downplaying a gay bashing. At their weekly dinners with all their old friends – he informed the rest of them of what’s been going on in his neighborhood and they were all naturally concerned. Artie pointed out that city kept getting more dangerous and Blaine said it was because for the first time the LGBT community has been getting more rights than ever.

But Mercedes and Sam had other things on their mind. They’re sort of back together. It’s not official or anything until they tell their friends about it, but Mercedes started to re-think the whole idea after she introduces Sam to her back-up singers. He was his usual silly and offbeat self. Which to be fair doesn’t translate so well to people he just met. So Sam came off as a slightly offensive idiot and Mercedes was left embarrassed.

Yet that wasn’t why her new friends had a problem with the new boyfriend. They were mainly caught up with the fact that he’s white. Not just white according to them, but he’s a blonde blue-eyed white guy. And they feel like he could alienate her fans.

Mercedes wanted to ignore what they said and then it began to filter in. And she found out that she couldn’t overlook Sam’s race seeing as her friends had a point. So she broke up with Sam and told him it would be best if he moved out.

Although she later changed her mind. Especially with what happened to Kurt.

Kurt and Rachel were out to dinner. He wanted to convince her to go back to school. Rachel had quit after Carmen Tibideaux called her out on lackluster performances in her classes and Rachel thought she no longer needed the school.

She thinks that having her play is all she needs… maybe even more than having friends. And that’s why she pulled out her diva behavior on Kurt. Because deep down she’s afraid he’s right about her career on Broadway – there might never be another chance after “Fanny”!

Rachel was so mad at Kurt that she left him there at the restaurant. So he was alone when he spotted a couple of guys beating someone up and chose to intervene. Kurt wanted to help and it only left him severely injured.

Everyone arrived at the hospital for him including his dad.

Rachel blamed herself for leaving him alone. But Blaine told her that Kurt would have intervened anyway. That’s merely who he is. Though it wasn’t easy for Mr. Hummel to hear.

He was mad at his son for taking such a risk and Kurt told him that just couldn’t standby as that was happening. He said that’s what being a man came down to and he learned that lesson from his very own dad.

Mr. Hummel didn’t like that answer though he knew where it was coming from. So he stayed in town long enough to see Kurt get back on his feet and head back to school.

Mercedes realized with Kurt’s emergency that she couldn’t throw Sam away because of the color of his skin. It would be the same as her dropping Kurt or Blaine for being gay. And once she made peace with herself she then got Sam back.

They finally told their friends and about themselves and everyone are happy for them. However it’s a little unclear if this is their second go-around. The first time these two dated doesn’t seem like it should count.