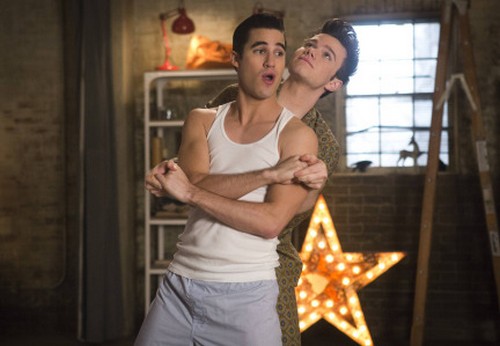 Glee returns to FOX tonight for an exciting new episode. In “New New York″ Glee-club alumni members are followed in New York City several months after leaving New Directions: Blaine and Sam move in with Kurt; Artie struggles to get around Manhattan; Rachel settles into the life of a Broadway star; and Mercedes moves to NYC to work on her album.

On the last episode of Glee the celebration continued with the conclusion of the two part episode.  Puck made a heartfelt admission to Quinn, prompting an unexpected and welcome response; Brittany and Santana made a realization about themselves and the future of their relationship; and an increasingly (and uncharacteristically) pessimistic Will gets mixed news about his future as a teacher.

On tonight’s episode a few months after the end of the glee club, New Directions alumni are adjusting to their new lives in the Big Apple: Blaine and Sam have moved in with Kurt, while Artie experiences difficulties navigating the mean streets of Manhattan. Also, Rachel gets accustomed to being a Broadway star, and Mercedes (guest star Amber Riley) moves to New York to work on her album.  Guest Cast: Amber Riley as Mercedes Jones; Adam Lambert as Elliot “Starchild” Gilbert.

New York is full of both promises and disappointments. While Rachel’s dream of becoming a Broadway star is coming true (personal town car and chauffeur included), her friends on the other hand are finding it hard to adjust to the fast past scenery. Sam and Archie are struggling with living the “dream”.

Sam can’t find a job. He said he would be staying with Kurt and Blaine for a few weeks and it’s been months since graduation. So they’re getting tired of him sitting around and playing video games all day long. No offense to Sam, but it’s starting to ruin the guys’ honeymoon buzz.

Instead of going outside to face even more rejection, Sam has taken to living like a hermit by hiding inside. Blaine wanted to convince him to move out and yet after he heard about Sam’s struggles he then chose to help cheer up his friend first and work on Sam’s living arrangement later.

He took him outside and made him sing in the middle of Times Square. ”Best Day of My Life” could have turned out to be the worst day. But Blaine was hoping it would make Sam brave enough to try again and it did. Mr. Schuester’s words of inspiration could only do so much after all. Success is really up to Sam now.

And it’s not like Artie has it easy either. He still has to face the everyday struggles that come with being handicap. Like when someone grabbed his bag in the subway. He didn’t have a lot of room to navigate down there and what makes it worse is that the thief was also handicapped. Though you wouldn’t be able to tell by the way he moved so fast on his crutches.

As of now the only person that is still in love with the city is Rachel and that’s because there’s currently only good in her life. While Kurt is left to deal with a very needy Blaine and an apartment that had gotten way too crowded. Archie is over at their place wanting to feel safe and Sam is back to auditioning, but staying on their couch in the meantime. So there’s never really a good time to tell Blaine to stop smothering him.

Blaine is in 6 out of 8 of Kurt’s classes. Blaine waits to have lunch with Kurt and he waits to go home with Kurt. And all of it is becoming way too much. Is friend and bandmate, Elliot, advised him to establish some boundaries with Blaine.

So Kurt was in a good mood when he returned home. He just came back from singing “Rockstar” with Elliott and what’s the first thing he sees upon entering his apartment – Blaine rearranging the furniture. It must have been the last because it made him SNAP!

Kurt lashed out Blaine and basically saying how dare he touch Kurt’s apartment. That hurt Blaine because he thought it was their apartment and that’s why he wanted to add his own personal touch to the place. And then to hear Kurt tell him about his conversation with Elliott just made him angrier.

Blaine stormed over to Elliott’s place accusing him of trying to sabotage his relationship. But Elliot was able to talk him down. He knows he doesn’t have feelings for Kurt and all he had to was explain that to Blaine. That suddenly made his situation that much clearer. Blaine was acting clingy because he was scared and jealous of Kurt’s relationship with Elliott and once he realized how much he overreacted; he then saw how he was pushing Kurt away with his actions.

When Blaine came home, he agreed with Kurt that they do need space from each other occasionally. And although they aren’t breaking up, they will be living apart. They both realized that it would be better for their relationship if they stop rushing things.

Rachel also picked up on her own attitude problem. That town car of hers had made her act like a spoiled princess. She even tried to compare the time she lost 9 dollars to when Kurt was robbed of his laptop and credit cards. Thankfully he gave her a great (and snappy) wake-up call and in return she decided to let go of the car.

It was keeping her away from the “realness” of New York.

Rachel chose to travel with Artie on the subway. He was scared to go back after the mugging and so Rachel promised to be his bodyguard. All he has to do to pay her back is to make sure she doesn’t get too big for her breeches again.

Funnily enough, they ran into the mugger on the train and Artie was able to subdue him with Rachel’s pepper spray. The cops also later found out that their thief was a hoarder so Artie’s laptop was safely recovered and will soon be returned to him.

Sam’s story at first didn’t appear as if he was going to have the same happy ending. He did end up booking a modeling gig and they tried put him up in one of those houses for the models, but he quickly caught on to the fact he would be living with a couple of junkies and anorexics. He left the house and just when his life was back to looking bleak in walked Mercedes!

Mercedes’s recording company is putting her up on the east coast and she does have extra rooms. And Blaine and Sam are looking for a place to live.

Their lives are shaping out to be the New York dream, but how long can it last when not all of them are the same people from high school?!