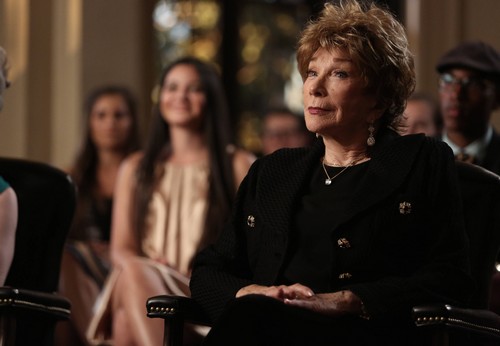 Glee returns to FOX tonight for an exciting new episode. In “The Back-Up Plan,” Rachel auditions for a television pilot, a move that poses a risk to her lead role in “Funny Girl.” Elsewhere, Mercedes tries to help Santana with her recording deal; and Blaine gets to know an older socialite.

On last week’s episode the night finally arrived for Rachel’s (Lea Michele) Broadway debut in “Funny Girl,” and she had very special guests in town to support her career-defining moment. Will Shuester and Sue Sylvester came into town to see Rachel’s musical.  Did you see last week’s episode?  If you missed it we have a full and detailed recap, right here for you.

On tonight’s episode Rachel jeopardizes her “Funny Girl” lead when she auditions for a television pilot. Meanwhile, Mercedes (guest star Amber Riley) tries to help get Santana in on her recording deal, and Blaine befriends an older, rich socialite. (guest star Shirley MacLaine)

Rachel takes to the limelight like a natural. She loves the fans and the press coverage, but as it happens she’s not really enjoying her time with her new talent agency. They’re supposed to be one of the biggest agencies around and yet they’ve treated an up and coming star like a nerd back in high school. Rachel was told to re-adjust her dreams of becoming a possible movie or television star because she “has a face for radio”. In other words they just told her that her nose was too big and it would better if people only stopped at hearing her instead of seeing her.

Mercedes’s recording company isn’t that much different. They finally listened in to her completed album and then told her nothing about it smells like a hit. As if she can rapidly come up with a hit now that they tossed away months of her life’s work like yesterday’s garbage.

It seems like the only people that haven’t had their self-confidence take a hit is Kurt and Blaine. The guys found out they were going to be meeting NYADA legend June Dolloway. Kurt was excited though Blaine wasn’t all that impressed. To him it’s merely an aging star coming back to relive her glory days with a plaque.

Meanwhile Rachel got the recognition she felt she deserved. A guy from Fox visited her after one of her shows to ask her to try out for a pilot. But there is a catch. In order to audition for the pilot – she’s going to have to miss a show in NYC.

And seeing as this is Rachel – she does try to wriggle herself out of a Broadway hit show. Rachel will always try to move on to bigger and better even if she risks losing out on a good thing while doing so. She did that already with school and she’s attempting a second go with “Funny Girl”.

Kurt warns her not to lie to her producer. Rachel wants to fake a sick day even though she’s the star. He said that it was only got come back to hurt if she was found. Yet Rachel tends to be reckless so the real question is will she listen to his sound advice?

Kurt goes on to have his own problems. Even though he was the one that was most excited to perform in front of June – she only asked Blaine to dinner. It looks like she wants to be his mentor. Poor Kurt! Technically, Blaine would have no way of knowing who this woman was without him so that’s got to hurt him on a deeper level.

Kurt lost out on a great opportunity, but he still is that loving and supportive boyfriend that Blaine needs. He helped him get ready for a night with June and then he made sure that Blaine appreciated this chance his has with a star. These things don’t come around all that often.

Blaine ended up learning that for himself. Being mentored isn’t such a bad thing. On his first official night, he got to perform in front of New York’s brightest and raise millions of dollars for charity.

As for Mercedes, she managed to find the right beat she was striving for and that’s all thanks to Santana. Her friend was the one that cheered her up when needed and she also helped Mercedes find the right note to create a hit. And in return, Mercedes wanted to put her on the album.

However Mercedes’s people aren’t having it. Santana is a newbie and this is Mercedes’s first album. It would be taking a risk to let some newcomer also join. If Mercedes wants a duet though then maybe she should look towards bigger names. Like people that can actually help sell her album rather than draw attention away from her.

When you’re still this new in the game then its best not to take the big risks – slowly work your way up to more success. That’s what Rachel had to learn the hard way. She did take that audition and lied to her producer. But it proved to be all for nothing.

Not only was the show she was trying out for a piece of crap; Rachel was also never given a fair chance during her audition. She started off by singing when it wasn’t a musical. Then she couldn’t grasp her lines because they were kind of new to her. And so she planned on returning home with her tail between her legs.

Though that also proved to be too hard for her. Rachel’s understudy fell off the stage in the middle of rehearsals so when her boss heard she was feeling better he asked her to come in immediately due to the urgency.

One problem with that – Rachel was in LA and her show is in New York! And LA with its traffic jams turns out not to be easiest place to leave. Which is why Rachel called Kurt in a panic.

Kurt needed to find a way to stall the show when Santana told him not to bother. After all she can go onstage as Fanny. Santana was once the understudy and knowing her she can probably talk her way back in.

Santana went onstage and saved Rachel. And when she came back she somehow wasn’t fired right away.

Rachel and Santana had been getting along before the show nearly ruined them so it’s nice that they got back to their old selves. Santana’s experience with Mercedes’s producer humbled her enough to realize that may she should be better to her friends. They’re the people that are going to stick by her no matter what. The rest of the world is cruel so Santana doesn’t have to be another person to heap that on.

Mercedes is going to help Santana with her singing career. And Blaine is going to get help from June whether he likes or not. When Blaine tried to extend that help to Kurt – he was told in no uncertain terms that it would better for him to call off his engagement, but he hasn’t told Kurt what June said about them.

Then there’s Rachel. She learned her lesson when she was almost fired. Her producer was so angry at her that he barely look at her. Still this is Rachel and no one can keep Ms. Berry down for long. After hearing she’ll be sued if she ever missed a show again – she then heard back from Fox. They didn’t like her for the show she auditioned for though they still managed to like her the actress.

They want to build a whole new show around Rachel with her as the star!