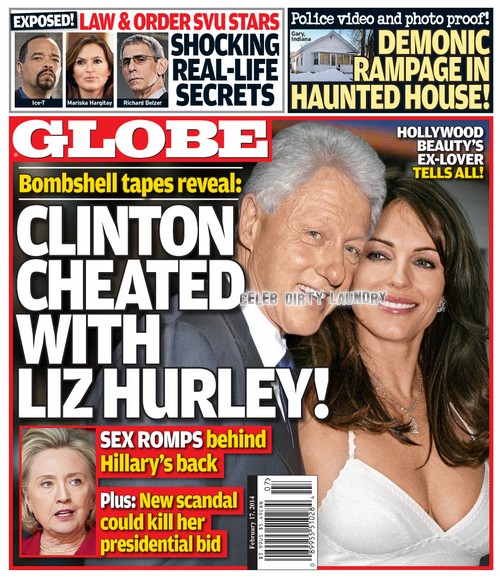 The GLOBE is reporting that President Bill Clinton cheated on Hillary Clinton with Liz Hurley. The headlines claim that Bill went on “sex romps behind Hillary’s back” and reveals how a “new scandal could kill her presidential bid.” GLOBE says that this scandal was all caught — and can be revealed — by a set of “bombshell tapes.” For the full story, including more about the scandals that could potentially disrupt the lives of the Clintons, pick up your copy of the mag.

Also in this edition of the tabloid: “Shocking real-life secrets” of the “Law & Order SVU stars exposed!” We’re not sure what kind of demons Mariska and Ice T have lingering in their pasts, but the tabloid promises to shed light on the scandals and secrets that they’ve tried so hard to keep out of the limelight. Boy, oh boy, everyone’s got a scandal, don’t they? What on earth do you think these stars have worked so hard to cover up? Check out this edition of the magazine (pictured above) to get all the juicy details.

The February 17th edition of GLOBE also reports on a haunted house that’s been hurled into a demonic rampage. Whether or not you believe in ghosts, spirits, and possession is up to you. But we just have to put this out there . . . . Possession is entirely real. Lorde’s dancing (can we call it dancing?) is complete evidence of this.

Disclaimer: The writers of this CDL have only the greatest admiration for Lorde, who’ll always be ROYAL in their hearts.