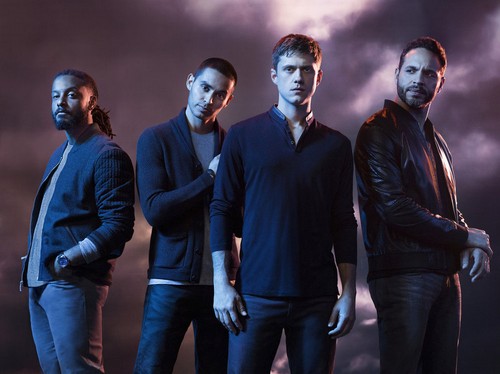 Tonight on the USA Network Graceland finally returns with its second season premiere called, “The Line.” On tonight’s show former rookie Mike steps up to the home plate.

For those of you who are new to Graceland, the show is about a group of undercover agents from various law enforcement agencies in the United States, including the DEA, the FBI, and the ICE, live together in a confiscated Southern California beach house known as “Graceland”. Rookie FBI agent Mike Warren is assigned to the house fresh out of Quantico training.

On tonight’s episode former rookie Mike (Aaron Tveit) takes charge and announces it to the house. However, some things haven’t changed, the serious trust issues that threatened to break the house up last season are still there, they are back with a vengeance.

Tonight’s season premiere looks like it is going to be great and you won’t want to miss it, so be sure to tune in for our live coverage of USA Network’s “Graceland” at 10:00 PM EST! While you wait for our recap hit the comments and let us know how excited you are for the season premiere of Graceland tonight. Check out the sneak peek below of tonight’s episode.

RECAP: Paul is driving in his car down a road and drives into a warehouse area, he meets up with a friend and shows him some snappers; than underneath he gives him some claymores. The police are standing by watching the whole thing, Paul goes inside the boat and picks up some money. Mike crosses name off his list and is told by Dale that he is wanted; Mike is told he’s having his bust investigation shut down since they found no drugs. Mike says there is a big smuggling of busses bringing heroin into the States; though the higher ups don’t care and shut down the whole thing. Mike is on the phone with Paul and asks him how the house is, Paul says it’s good but it’s missing him; Mike tells a bunch of people to leave an office so he can talk to Paul. Paul tells Mike the cartel of a hit on him and the he should be careful; they hang up and promise to call each other soon.

Mike comes back to Graceland and tells everyone there are no guns downstairs and asks what they are doing; he goes over and gives Paige a hug. Jonny offers Mike a beer but Mike declines it; Jonny tells him to lay back but Mike goes ahead to go see Paul upstairs. Mike comes up and says he feels good being back; Mike is given a folder and looks through it. Mike goes downstairs again and Jonny is calling him over; Jonny says it’s good to see him and Mike asks how he has been. Jonny says he’s great working on cases alone and apologizes for the mess. Mike goes and looks around the place and heads to the coach to sleep, Mike gets a call and it’s Jess; she asks what hes’s donig there and mentions how Paul offered to help him with the cartel. Paul is having a nightmare and Charlie wakes up tells him he looked like he was in a happy place; Paul says that being with her is his happy place. They two start to kiss when someone knocks on the door; Mike gets up and says goodmorning to everyone. Charlie is drawing a tattoo on Paul’s arm for his undercover work, Mike goes ahead and asks Charlie how Paul is doing; Charlie says he’s doing really good. Charlie tells Mike to stop bringing this stuff up, Mike says he only wants to know the truth.

Jonny tells the team to stay on stand by till his order, Paul and Mike drive up to meet Leon; Jonny has a sniper on Leon. Leon goes ahead and pulls out a gun on Paul, Leon says he doesn’t want to split the money; Leona says that he will hurt Paul bad. Paul is blocking everyones shot on Leon, JOnny goes ahead and shoots Leon right in the hand. Jonny goes ahead and helps Leon with his wound; Paul asks how Leon was being reached. Paul searches in Leon’s phone and makes a the call, Paul says that if they want their marine than they go to him; the guy just hangs up not caring. Mike asks what happened to the whole team, they are like burn outs; Jonny asks to hit Mike. Paul tells Mike the operation is off, Jonny then says they were fine without Mike; Mike is on the beach and Paige comes over and tells him he must have changed being gone. Mike says that he was so excited being in DC, he was stuck behind the desk and he confesses that he missed being out on the job. Paul is sitting on his bed and tells Charlie is late; Charlie says she just needed a long walk. Mike asks Paul if they can talk interrupting the two; Mike tells Paul that he has control over the job with his rank.

Paul tells Mike he got a call and that he has a place and time, Leon is there with them to point who exactly he was working with; Mike and Paul are at the place waiting. A bunch of officers come to the scene and raid a garage full of people betting on some illegal dog fighting ring, Leon points out the man and he disappears out of nowhere; Paul turns around and mike is gone as well. Paul notices a black van that probably go Mike, they are driving after them; Paul and the others go inside and realize they are already gone.

Paul is getting any information he can on Mike and the van; Paul gives a homeless man 20 dollars and is told they switched into an old and red car. Mike is being suffocated with a plastic bag as he is tied up to a chair; Mike headbutts one of the guys and they start to suffocate him even more to the point he blacks out. Paul comes in and shoots the two guys and Mike is saved.

Mike tells Jess he was right about the buses and asks for a team to go and bust this; Jess says it’s going to be tough. Paul calls for Charlie and he tells everyone Mike has an announcement; Mike says that guys who captured him were only pretending to be the guy they were looking for, Mike talks about his bus theory and he has a team to prove it; Mike than tells them that they are his team.