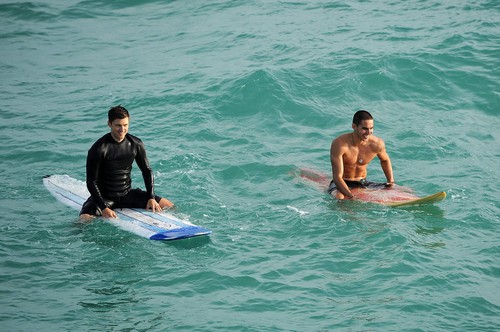 Tonight on the USA Network Graceland returns with another episode of its second season called, “The Unlucky One.” On tonight’s show the Solano case is in shambles; Paige is deep undercover within a sex trafficking ring.

On the last episode Mike rushed everyone’s undercovered when Jessica visited while Jake’s personal life continued to create problems, and Johnny took a risk to solidify his cover with Carlito. Did you watch the last episode? If you missed it we have a full and detailed recap, right here for you.

On tonight’s episode Mike and Briggs go to extremes to find Paige while she is undercover with a sex trafficking ring when the Solano case goes to pieces, seemingly due to an act of sabotage.

Tonight’s episode looks like it is going to be great and you won’t want to miss it, so be sure to tune in for our live coverage of USA Network’s “Graceland” at 10:00 PM EST! While you wait for our recap hit the comments and let us know how excited you are for this episode of Graceland tonight. In the meantime, check out the sneak peek below of tonight’s episode.

Tonight’s episode of Graceland begins with Mike paying Lawrence a visit at the safe house he stashed him in. Mike tells him he wants to know everything about Carlito’s operation. Lawrence says there were two buses, once carried contraband, and if the bus got hot he would swap out the legit one. Mike wants to know who is protecting Solano. Lawrence has no idea, he just knows he has a “guardian angel” that watches over him.

Meanwhile, Paige is in trouble. She swallowed the heroin from the girl she found on the bus named Anica’s stomach and went undercover with the other traffickers posing as Anica. The only problem is when she arrived and they made her throw up her balloons she was short one (because one ruptured in the real Anica’s stomach). One of the men throw Paige in to a room and tell her to remove her clothes so that she can “be punished.” He takes photos of her naked and then throws her in to a room full of girls watching cartoons and sleeping. She sits down next to Lina and shakes he rhead at her so she doesn’t blow her cover.

Jessica pays Mike a visit and gushes about his “major takedown,” he reminds her that they have nothing and all the evidence was blown up. He is determined to find out who the leak is. Jessica doesn’t want to hear it, she wants Mike to come back to DC with her.

Dale calls Charlie from jail and asks her if Paige came home. Mike and Johnny head to jail to pick up Dale. Charlie and Paul go to where Dale was arrested. When they arrive they see the EMT’s taking Anica’s body out of the bathroom. They find Dale’s truck and listen to his wire recording. They realize that Paige took Anica’s place as one of the drug traffickers.

Paige is forced to line up with all of the other girls, and they are each given a card with numbers on it like a makeshift line-up. A man is brought in and he eyeballs the girls are up and down. Lina bites her cheek so that it bleed and pretends to couch up blood. When the man sees the blood, he decides not to buy any of them and leaves.

Mike and Paul head back to the house where Lawrence is handcuffed to a chair. They ask him where Solano keeps his drug trafficking girls. Lawrence insists he doesn’t know where they are holding Paige. After some tormenting Lawrence confesses that he can set up an arrangement for them to go look at the girls and buy them. Paul tells him to make the call.

Lawrence sets up the date with Sulla for Mike and Paul to go look at the girls. He tells them someone will pick them up at the motel off from Pike, and they have to bring $22,000 with them. Meanwhile, Paige has no idea her team is coming to spring them and is planning to escape with Lina.

Paige and Lina make a run for it and Sulla catches them and smashed Paige’s knee with a baseball bat. The next day at noon Sulla and his goons pick up Mike at the motel to take him to the building where they are keeping the girls. Dale follows them to the building.

Sulla lines the girls up, and after a few minutes Mike announces that he is going to buy Paige. Paige begs him to leave her and buy Lina, but Mike won’t listen. Sulla’s goons drop Mike and Paige back off at the motel. Once they are gone, Mike explains to Paige that they can’t shut Sulla’s operation down. Sulla is the last link Mike has to the Solano Cartel because all of the evidence was burned. He promises her that in three days he will go back inside and buy Lina and shut it down, but he needs time to regroup and figure out another way to take down Solano.

After Mike drops Paige off safely at home, he heads to the safe house. He sets Lawrence free and gives him some cash and a passport, he tells him to get out of the town ASAP, and don’t call anyone or “make a ripple.” Lawrence agrees and scurries off.

Later that night Paul confesses to Charlie that they got the sex trafficking intel from Lawrence. She demands to know what he did to Lawrence. Paul admits that they poured liquor down his throat, but they didn’t kill him. Charlie reassures him that she doesn’t hate him for it.

Mike heads home and Jessica stops by, she wants to know if he is coming to DC. He informs her he is staying there, and Jessica warns him if he doesn’t come they are over. He’s okay with it though.

Mike and Paul head to the beach the next day, Mike tells him he isn’t going back to DC because they didn’t make any arrests and they didn’t bring down Solano. Mike receives a phone call and learns that someone murdered Lawrence at his house. Mike heads over to the crime scene and meets Sid Markham, head of the gang task force. Sid shows him Lawrence’s headless body, and says that it was an obvious cartel hit.

Dale checks in on Paige, who is sitting in her room crying. He wants to apologize but doesn’t know how, he gives her a music box with a ballerina in it, since Lina was a dancer. He wants Paige to hold on to it until they get Lina back. Paige breaks down in tears and Dale comforts her.

Mike rushes home and gives Paul Sid’s business card. He says that Sid is Solano’s insider, he recognized his second in command the night that the barrels were blown up. Paul warns that LA Gang Task Force is a huge organization, and Mike declares they are going to “burn it them to the ground.”