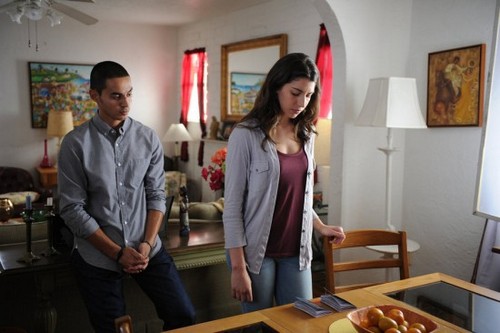 Tonight on the USA Network Graceland returns with another episode of its second season called, “Los Malos.” On tonight’s show Mike faces his enemy and vows to take him down at all costs even if it means his agents operate beyond the boundaries of the law.

On the last episode Mike and Briggs went to extremes to find Paige while she was undercover with a sex trafficking ring when the Solano case went to pieces, seemingly due to an act of sabotage. , Mike concludes that the leak came from there, and that the whole task force is corrupted by the Solanos. Jess urges Mike to declare victory on the bus operation and return to DC, but he decides to remain in California, breaking off their relationship. Did you watch the last episode? If you missed it we have a full and detailed recap, right here for you.

On tonight’s episode we are expecting to see some violence going down.  Will Mike push to far when he faces his enemy and vows to take him down at all costs?

Tonight’s episode looks like it is going to be great and you won’t want to miss it, so be sure to tune in for our live coverage of USA Network’s “Graceland” at 10:00 PM EST! While you wait for our recap hit the comments and let us know how excited you are for this episode of Graceland tonight. In the meantime, check out the sneak peek below of tonight’s episode.

Tonight’s episode of Graceland begins with Mike interrupting Officer Markham’s lunch at a café. He’s on the phone with Carlito when Mike arrives and he hangs up. Mike tells him he should “get his affairs in order” because he knows he is working with Carlito. He tries to deny it but Mike storms off.

Paul is preparing to go undercover at the police station. Charlie is stressed and doesn’t want him to go, she thinks that they are going to recognize him from Santa Monica and blow his cover. He reassures her that everything is going to be fine. Charlie heads to the bathroom and runs in to Johnny, and they bicker.

DJ and Mike head out to check on Paige where she is keeping surveillance on the building where Carlito is holding the girls. Mike gives DJ a cell phone and tells him that Markham will call to check Paul’s references and he wants DJ to cover for him. DJ agrees and hops in Paige’s car to keep surveillance. Sure enough a few minutes later the phone rings and Garrett is checking in on Paul, DJ covers for him and tells a story about when they used to work together. Garrett buys it hook, line, and sinker.

Back at the house Charlie reveals to Mike that she did some research on Markham, and learned that he has two banks. Unfortunately they can’t get in without a warrant, Charlie jokes that they should “rob the joint.” Meanwhile at the police station Garrett informs Markham that Paul checked out and he is legit.

Paul watches as Markham recruits a criminal to set up a buy for him. He blackmails Randy in to setting up the buy by reminding him that his brother Marcus is in jail.

Johnny heads to Lucia’s and he and Lucia are both taken hostage inside the house. Two goons are waiting for guns that Carlito promised them. Johnny reassures him that Simon is bringing the guns and they are on the way. Meanwhile the two guys proceed to snort lines of cocaine and wave their guns around.

While Paige and DJ are watching the building where the girls are, another man shows up and buys one of the girls. Paige and DJ follow the guy back to the motel and take the girl from him. While DJ is putting the girl in the car, Paige attacks the buyer and punches him in the face yelling that he is a “piece of sh-t.”

Mike returns home and tells Charlie that he got them a way in to the bank. He slipped a hundred dollar bill to a food vendor and they deposited it in the bank. So, the FBI’s counterfeit division is going in to the bank and they agreed to let Mike tag along.

Simon shows up at Lucia’s house and orders the two goons to cut Lucia and Johnny loose. Then he takes out a gun and shoots the two men, but they shoot and kill him in the process. Lucia has nowhere to go, Johnny says that he is going to take her somewhere safe.

Randy set up the meet for Markham, but he refuses to wear a wire. Paul takes advantage of the opportunity and volunteers to wear the wire and go in and make the buy for Randy. Markham gives him the go-ahead since he can speak Spanish.

Johnny heads to his Mom’s house, she isn’t happy because he has ignored her for three months. Johnny sweet talks her in to letting Lucia spend the night at her house.

Mike and Charlie head to the bank, Charlie distracts one of the tellers while Mike goes on to her computer and prints out copies of Markham’s account transactions.

Paul’s deal goes south when they realize he is wearing a wire. Markham and his men rush in to take down the operation, Mike chases the seller out the back door and tackles him and takes him down. Markham is impressed and offers Paul a spot on his team.

Meanwhile Johnny and Lucia are eating dinner with his mom. She is telling Lucia stories about when Johnny was little. After dinner Johnny and Lucia sit outside on the front porch drinking beer and talking about their childhoods. Lucia doesn’t understand why Johnny would want to get in to her family’s business. Johnny reassures her that he isn’t using her to infiltrate his business.

Charlie, Mike, and Paul head home to fill each other in. Mike reveals that all of Markham’s cash is hidden in safety deposit boxes. He and Paul scheme to hire a crew to rob the bank, if Markham loses all of his cash then he will start doing business with Solona again and they will be able to catch him.

DJ checks on Johnny and learns that he is hiding Lucia in his mother’s house. DJ is livid and tells him that she isn’t a stray dog for him to take home, he needs to get rid of her now. Johnny heads back in to his mom’s house and climbs in to bed with Lucia.