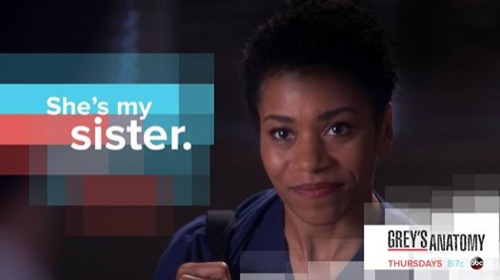 On the last episode, Secrets from Ellis Grey’s past came to light when Meredith watched old videos and read through her mother’s journals. Meanwhile, Maggie rocked the hospital with an unexpected announcement; Alex got new responsibilities and Callie focused her attention on the Veterans’ project. Did you watch the last episode? If you missed it, we have a full and detailed recap right here for you.

On tonight’s episode in this Callie and Arizona centric episode, the couple takes a look into the problems that have contributed to their troubled marriage. At work, Callie immerses herself in the Veterans’ project, and Arizona struggles to impress Dr. Herman. Meanwhile, Richard leans on Bailey for advice.

This episode looks like it is going to be a great episode and you won’t want to miss it, so be sure to tune in for our live coverage of ABC’s “Grey’s Anatomy” Season 11 episode 5 at 9 PM EST!

Callie and Arizona’s relationship is currently at an impasse. The two of them can’t seem to agree on anything. And their fights which have become legendary have even found a place inside of the occasionally operating room. So to save their marriage and possible their careers they turned to couple’s therapy for the answer to their problems. But the sessions haven’t been working as much as they thought.

Their therapist suggested the couple take a break from each other. And Callie found just the idea of an, albeit temporary, separation stupid. How are they supposed to work on their marriage if they’re more apart than ever? However, while Callie didn’t want the separation; Arizona was ready to test it out.

So the two of them agreed to a month separation. They have to live in the same house side by side because of their child but otherwise they’re not allowed to talk or share in any kind of intimacy.

Hence Callie cracked after one night. She wanted to call the whole experiment off and Arizona refused to do so. She was the one pushing for this break and she didn’t want Callie to ride rough shod over her. That happens to be one Arizona’s many complaints about her wife.

Yet after a while of speaking only through third parties and that includes at work – Callie started to lose her temper. And that didn’t create a good environment for anyone because it left Callie angry and without anyone to talk to. Though, Callie later got lucky with Meredith. The two of them were finally able to turn to each other and vent about their spouses.

So that took a bit of the pressure off and the ladies each managed to relax enough to go home without dreading it. But Callie broke the rules once she got there. She was drunk so she went to Arizona’s room and the two fell back into old patterns.

They stopped just short of having sex. Yet their therapist told them they broke the agreement which meant they had start their month long separation all over again. And the last time they did this – they only made it 9 days!

Although, this “break” does have some benefits. For Callie at least. Callie was having a most difficult case. Her patient complained of chronic pain and it took forever for her to find the origins of it. And so when she got the chance to work on a unique case – it made her feel better about herself. From now on she’ll forever be attached to the success of that case which is what all doctors secretly want.

But, as the therapist will soon come to realize, when Callie gets to be too confident in herself – she tends to want to celebrate. So again she initiated intimacy with her wife. Yet this going back and forth is starting to hurt Arizona’s personal progress.

Arizona recently began her fellowship and she’s been feeling a bit lost ever since. She learning new procedures and seeing as she’s interfered a tad too much in Alex’s cases – he’s denied her admissions on the Pediatrics floor. So Arizona was cut off from the familiar and because her wife wanted sex – she was then too tired and unprepared to take charge in surgery. Which didn’t impress her new boss.

That mistake got her chewed out by the attendee. Dr. Herman had even voiced doubt about Arizona’s abilities.

Though at the end of their separation, Arizona still wanted to be with Callie. In fact she felt surer of that than ever. And, sadly,

Callie was forced to tell her that she didn’t feel the same way. Their time apart made her realize that she was once too caught up in trying to make things work with Arizona that she essentially let a lot of things slide.

So Callie told her wife she wanted out. And it’s not because she didn’t love Arizona – she did. But she wanted to be happy again and didn’t envision that happening with Arizona.