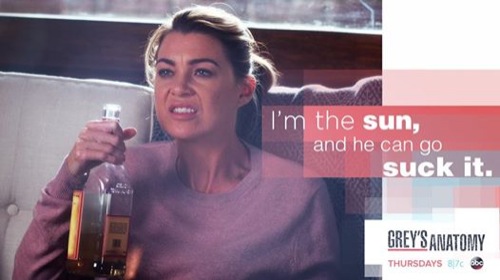 On the last episode, Owen introduced Callie to the Veterans Hospital patients in hopes that she would help them with her robotic limb lab, Jo became jealous of Alex and Meredith’s friendship, and Maggie continued to confide in Richard. Meanwhile, Alex and Bailey prepared to go in front of the board. Did you watch the last episode? If you missed it, we have a full and detailed recap right here for you.

On tonight’s episode Secrets from Ellis Grey’s past come to light when Meredith watches old videos and reads through her mother’s journals. Meanwhile, Maggie rocks the hospital with an unexpected announcement; Alex gets new responsibilities and Callie focuses her attention on the Veterans’ project

This episode looks like it is going to be a great episode and you won’t want to miss it, so be sure to tune in for our live coverage of ABC’s “Grey’s Anatomy” Season 11 episode 4 at 9 PM EST!

Meredith has recently started reviewing some of her mother’s old videos and somehow that’s brought about certain changes in her behavior. Take for example her treatment towards her husband. She’s being mean to her Derrick. Meredith is treating Derrick like her mother treated Thatcher. Like he’s in constantly in the way.

And meanwhile at the hospital, her half-sister is choosing her career in order to go work where she’ll at least more comfortable. Maggie has turned in her proper notice. Secretly, she wants to get away from Meredith and Richard.

Richard had his chance to start over with Ellis and Meredith but he didn’t take it. Then he was given another opportunity to come clean with someone and he held off on saying anything until the very last moment. So now Maggie doesn’t trust him because of that.

Hence, neither Richard nor Meredith are in the position to change Maggie’s mind. Richard is too guilt ridden to try and Meredith is too busy with her new case involving a little girl with a giant tumor in her stomach. And that’s why Maggie looks like she’s actually going to be leaving after a mere few months on the job – none of the people she wants to care enough know what to say.
Plus Meredith didn’t even bother to tell her husband about her. Which is something Maggie had to find out on her own!

And Maggie is an exceptional surgeon. She kept working on a patient when everyone else had given up. They were just going to accept the patient was never going to walk again. But Maggie wanted to fight that assumption. So she’s kept working and being able to think on her feet allowed her to do something in the OR that’s never been seen before. Afterwards, when she asked the patient to wiggle his toes – he managed to do it.

But Meredith’s surgery was a bit of a touch and go. She did save her patient and yet to do so she ended up using her mother’s method. And that brought back memories for Richard. He was there when her mother first used that method and it wasn’t long after that he promised her he was going to leave his wife. Though he never went through with it.

When Richard ultimately chose to stay with his wife, Ellis tried to kill herself. Thankfully, Meredith was resourceful even as a little girl and so she called 911.Thereby saving her mother and her sister’s lives.

Prior to that though she couldn’t remember what happened between her mother and Richard. And he told lied to her when he said he didn’t remember as well. He knew what happened. It’s just he was afraid to tell Meredith. Only, later, once he talked about everything with Bailey that Richard chose to finally come clean to Meredith.

It seems the day he broke it off with Ellis, he did so because she had already become too successful. He was jealous of what she had managed to accomplish while they were both so young. And he didn’t want to spend the rest of his life living in her shadow.
But if he had only chosen differently that day – so many lives would have been better off.

Meredith never had a real mother. She barely even knew what a real family life looked like and so it has always been an issue of hers. Yet she knew she didn’t want to be like Ellis. So she talked to her husband. He had learned the truth from Maggie and surprisingly he did the one thing she had been waiting for – he accepted her right off the bat.

Hence Derrick put aside his earlier argument with his wife and he just let her use him as a sounding board. Meredith can recall her mother’s pregnancy but seeing as Ellis went to great lengths to hide it – she suppressed all memories of her mother gaining weight and then abruptly losing it. She simply carried on with her life like everything was normal because that’s what her mother was doing.

And really she shouldn’t give up on Maggie. So she found her sister before the other woman could escape the hospital and Meredith showed her their mother’s journals. It’s not all warm and loving about the pregnancy. Ellis wasn’t the type but the doctor in Ellis kept a record of her meals. She wanted to eat healthier with a baby on the way.

It wasn’t much though it showed Maggie that she was cared for. Besides, speaking about their mother could be a way for her and Meredith to adjust to being sisters.