Grey’s Anatomy LIVE Recap: Season 11 Episode 3 “Got to Be Real” 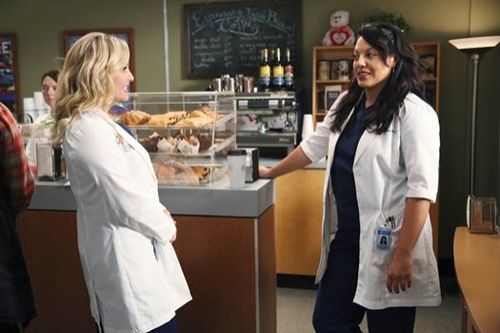 Tonight on ABC Grey’s Anatomy returns with a great all new Thursday October 9, season 11 episode 3 titled “Got to Be Real.” On tonight’s episode, Alex [Justin Chambers] and Meredith’s [Ellen Pompeo] friendship ignites jealousy in Jo. Meanwhile, Maggie continues to open up to Richard; Owen wants Callie to use her robotic-limb lab to assist veterans; and Alex and Bailey prepare to face the hospital board.

On the last episode, in this Maggie centric episode, she continued to try to make a positive impression at the hospital but found herself in extremely unfortunate situations. Meanwhile, Richard continued to hold onto his secret and the doctors worked with a dying woman who was being kept alive by her daughter. Did you watch the last episode? If you missed it, we have a full and detailed recap right here for you.

On tonight’s episode Owen introduces Callie to the Veterans Hospital patients in hopes that she will help them with her robotic limb lab, Jo becomes jealous of Alex and Meredith’s friendship, and Maggie continues to confide in Richard. Meanwhile, Alex and Bailey prepare to go in front of the board.

This episode looks like it is going to be a great episode and you won’t want to miss it, so be sure to tune in for our live coverage of ABC’s “Grey’s Anatomy” Season 11 episode 3 at 9 PM EST! While you wait for our recap hit the comments and let us know what you think about season 11.

Tonight’s episode of Grey’s Anatomy kicks off with Alex trying to take a shower before work. Meredith is in his bathroom ranting and pacing back and forth complaining that she has a stalker and there is no way Margaret Pierce could be her half-sister. Meanwhile Jo rants outside the door that when Cristina was here she didn’t have to share her boyfriend with Meredith.

Derick and Arizona are trying to get Jackson to reschedule the board meeting, they were supposed to vote in a new member that night but they both have plans. Jackson says there is no way they are rescheduling the meeting. Miranda receives a message calling her to the ER because there was a massive pile-up on the highway and Meredith didn’t come to work. Meanwhile, Meredith is still at Alex’s. He tells her that she should talk to Richard Weber, he would know if her mom had another baby.

Trauma victims begin arriving in the ER from the car accident. There is a mob of press and staff surrounding a patient, it’s a mad house. Miranda pushes her way through and realizes they are all taking pictures on the cell phones of one of the patients, he literally has a log speared through his chest.

The man with the log through his chest is rushed in to an emergency room and Miranda, Maggie and Richard begin working to remove branch. Meanwhile, Arizona and Callie are arguing in the hallway. Arizona is in over her head with her fellowship and her job and Callie reminds her that she can’t miss their surrogacy meeting.
While everyone at the hospital is rushing around with the car accident victims, Meredith is getting wasted and pounding shots at Alex’s house. He tells her that she should be talking to her husband about her new sister not him. He’s busy trying to practice his speech for the board meeting.

Owen brings in an army vet amputee and promises him that Callie will give him a brand new state-of-the-art robot leg. Callie takes the soldier to her lab to run some tests, and realizes that there is too much nerve damage in his leg to make him a candidate for the robot leg she has been working on. She drags Owen out of the office and explained that he got the guys’ hopes up and she can’t help him, he doesn’t have enough nerves left in his lef. Owen screams at her that she has to help him and informs her “it is an order.” She screams back that on the floor he I sher boss, but in her lab..she is the boss and doesn’t take orders from him.

Jackson pays Callie a visit later in the lab, and asks her what happened with Owen, he says she doesn’t have to take orders from Owen in her lab. But, it would be cool if she would stop screaming in the hallways because he never gets to perform surgery anymore, he is always playing hall monitor. Callie fills him in on her fight with Owen. Jackson volunteers to reroute the army vet’s nerves in his leg so that the robotic leg might work, Callie thinks it is a genius idea.

Alex and drunk Meredith hack in to the hospital’s personnel files to see when Maggie Pierce’s birthday is. Alex finds the info and says that Meredith’s mom Ellis would have been pregnant during the Spring of 1983, which surprises Meredith because that is when her mom tried to commit suicide. She doesn’t really remember what happened around that time, she was only five, she knows right after they moved to Boston. Alex looks up Ellis’s medical records from the spring of 1983 and learns that Meredith’s mom was really pregnant, and Maggie is definitely her sister.

Owen tries to apologize to Callie, she wants to know why he was so furious. He confesses that he has had a pit in his stomach ever since Cristina left, and he is afraid his dreams are over. He wants something to go right and he wanted something to make him feel like he is making a difference. After his meltdown, Callie reveals that Jackson is moving the soldier’s nerves so he will be able to get a robot leg after all.

Derek and Amelia are feuding over the head trauma patient. Amelia storms off, and Derek tells an orderly to prep the patient for surgery. They argue that it is Amelia’s patient and not his. He says that the case is “too big” for Amelia and he is taking over.

Weber comes over to Alex’s house to visit Meredith, she demands to know why he didn’t tell her he was Maggie’s father. He insists he just found out a week ago and he has been trying to find a way to tell her. He had no idea Meredith’s mom was pregnant and he is furious that he missed out on all of Maggie’s life. Weber explains that he and Maggie had an amazing day working today, and he really wants to tell her.

Callie, Jackson, and Owen are all working on the army vet’s leg. Callie says that she and Owen are taking a chunk of her research money to work with army vets and amputees, and she invites Jackson to team up with them. He agrees and thinks it will be great for the hospital

Callie and Arizona head to the surrogate’s office. Callie gushes about her new project at the hospital with amputees. Arizona says that they are going to have too much on their plate with Callie’s new project and her fellowship. Callie freaks out because she realizes that Arizona doesn’t want another baby.

Derek and Amelia’s motorcycle accident patient hemorrhages and is declared brain dead during surgery. Aferwards Amelia and Derek scream at each other over him being “king of neurosurgery.” Derek confesses that Meredith backed him in to a corner and made him take a step back in his career instead of forward, and he feels like he will never get another opportunity like the one that he passed up.

It’s finally time for the board meeting, everyone heads to the conference room. Miranda and Alex wait outside to be called in to give their speeches. Weber and Meredith arrive at the hospital, and Weber stops outside to talk to Maggie. He confesses to Maggie that he and Ellis knew each other very well. She interrupts and demands to know why he waited so long to tell her, she thinks that he knew Ellis was pregnant and gave her up years ago. She storms off before he has a chance to explain. The board listens in on Miranda and Alex’s speeches and then they call Alex back in to the conference room. Miranda breaks down on the bench and begins crying because she thinks that they chose Alex, but then Alex storms out and grumbles “congratulations.” Miranda is the newest member of the board.