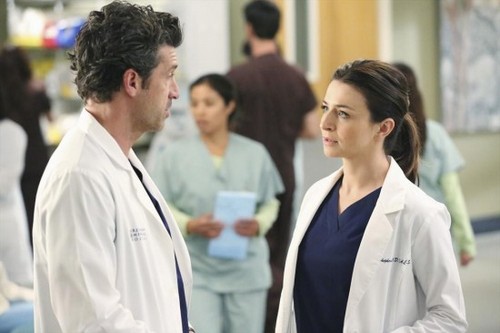 Tonight on ABC Grey’s Anatomy returns with a great all new Thursday November 13, season 11 episode 7 titled “Could We Start Again, Please?.” On tonight’s episode, Amelia’s past addictions don’t stay hidden and result in trouble for her at work. Meanwhile, Jo performs her first solo surgery; Arizona [Jessica Capshaw] must make a tough call when Dr. Herman is away; and a couple who were caught in a fire arrive at the ER.

On the last episode, Owen became invested in a patient when he realized she may have served in the military, April’s mother (Connie Ray) payed her daughter a visit and bonded with Jackson, and Derek planned a family dinner. Meanwhile, a patient’s diagnosis caused Bailey to reconsider her own health issues and Dr. Herman dropped a bombshell on Arizona. Did you watch the last episode? If you missed it, we have a full and detailed recap right here for you.

On tonight’s episode as per the ABC synopsis, “secrets about Amelia’s past addictions come to light and cause problems for her at the hospital; Bailey oversees Jo’s first solo surgery; and Arizona must make an executive decision in Dr. Herman’s absence. Meanwhile, the doctors spring into action when a couple arrives at the emergency room after escaping a fire.”

This episode looks like it is going to be a great episode and you won’t want to miss it, so be sure to tune in for our live coverage of ABC’s “Grey’s Anatomy” Season 11 episode 7 at 9 PM EST!

Dr. Herman gave Arizona two choices. Her fellow doctor could either rat her out and thereby end her own career in the process or Arizona can keep her mouth shut about Herman’s tumor. So when it really came down to it – Arizona made the only choice available to her. She picked the safety of her patients over herself!

And Herman forced her to do so. After they had talked, Herman then pulled a disappearing act right when patient of hers desperately needed her. Hence Arizona had to make up an excuse for Herman’s absence and once she started to do that – lie and see for herself how unreliable Herman was – of course she was going to be set on reporting Herman to the board.

Elsewhere, a couple came into the Emergency Room after having survived a fire. The husband and wife were both badly injured and they needed surgery. However Amelia’s past came back to bite her. Just as she was about to perform surgery on the wife, the couple’s only child came into the hospital and she immediately recognized Amelia from their Narcotics Anonymous meetings.
The daughter refused to have Amelia on either of her parents’ cases. And to make matters worse – she announced why in full view of the entire hospital.

So now Amelia’s secret is out and no one is willing to take it easy on her. Including her own brother.

Derek could have stood up for his sister but he didn’t. Instead he stole her surgery and Meredith had to call him out on it. For someone who’s been pushing her to be nicer to her own sister – Derek should have supported his when she needed her big brother.

After all, it was Derek that hired her. So he’s known all along about Amelia’s addiction and if he kept it secret from most of the hospital then that’s on him as well. Because Amelia took the job believing everyone had already known about her past.

Owen had later approached Amelia about her addiction but she refused to answer any of his questions. She said unless she’s been slacking off on the job then her private life was no one else’s concern. Which is true though Own wasn’t satisfied by her answer. He still wanted answers so he went to Derek. And Derek surprised everyone by defending his sister.

He gave Owen the impression that Amelia is a risk and Owen ran with it. He called a board meeting and Amelia could very well find herself without a job at the end of the day. And the sad part is it would be Derek’s fault if she lost her job.

As for Arizona, she had gone ahead with the fetal surgery that Dr. Herman was supposed to spearhead. Although she made some changes of her own in the operating room. With those changes, she was only able to save the child and not the mother. The mother it seems had a pre-existing condition that would have risked her own life anyways and if the baby had stayed in any longer – both mother and child would have eventually died.

So Arizona’s decision to carry on with surgery did help preserve a life and when Dr. Herman arrived – Arizona asked to be taught how she could have possibly have save both mother and child. Meaning, for the time being at least, Arizona will not be reporting Herman.

Then there’s Derek who showed up at the board meeting Owen had called and finally spoke up in Amelia’s defense. He admitted to the board that he had wanted his old job back and that he had let his ambition cloud his judgment earlier when Owen had asked him about his sister. So he told the board to stand behind Amelia. He confessed he couldn’t do better a job than her.

So Amelia got to keep her job and while it was her brother that ultimately saved it – that doesn’t mean she’s not mad at him.  Ever since their dad died, Derek had always looked after her but he hadn’t done that when she needed him. Instead he attempted to bury her career to further his own.

Apparently, Derek isn’t ok about giving up his job at the White House and until he learns to deal with that – he’s just going to keep making mistakes.

But one good thing came out of Derek and Amelia fighting. Meredith then man a real effort to connect with her own sister.