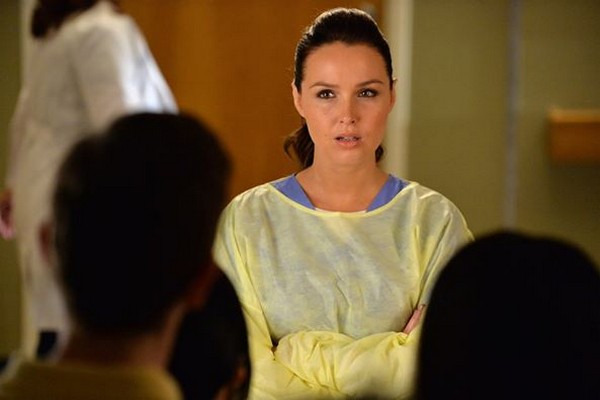 Tonight on ABC Grey’s Anatomy returns with a great all new Thursday November 6, season 11 episode 6 titled “Don’t Let’s Start.” On tonight’s episode, Owen [Kevin McKidd] bonds with a patient who may have been in the military. Meanwhile, April’s [Sarah Drew] mom visits her and Jackson; Bailey takes a closer look at her own health; Derek arranges a family meal; and Dr. Herman has shocking news for Arizona.

On the last episode, in this Callie and Arizona centric episode, the couple took a look into the problems that have contributed to their troubled marriage. At work, Callie immersed herself in the Veterans’ project, and Arizona struggled to impress Dr. Herman. Meanwhile, Richard leaned on Bailey for advice. Did you watch the last episode? If you missed it, we have a full and detailed recap right here for you.

On tonight’s episode as per ABC’s synopsis, Owen becomes invested in a patient when he realizes she may have served in the military, April’s mother (Connie Ray) pays her daughter a visit and bonds with Jackson, and Derek plans a family dinner. Meanwhile, a patient’s diagnosis causes Bailey to reconsider her own health issues and Dr. Herman drops a bombshell on Arizona.

This episode looks like it is going to be a great episode and you won’t want to miss it, so be sure to tune in for our live coverage of ABC’s “Grey’s Anatomy” Season 11 episode 6 at 9 PM EST!

Meredith and Derek were working in the Emergency Room when an awkward conversation with Maggie led to Derek wanting to have Meredith’s sister over for dinner. Although Meredith doesn’t really like that idea. Besides, she was anti-social before Maggie arrived and nothing much has changed since.

Yet for Derek, Meredith decided to go outside of her comfort zone. Meaning she did follow up on her husband’s suggestion and she invited Maggie. However Derek then went and further complicated things by inviting Richard to come to the dinner as well.

It was kind of sneaky of him to invite extra people behind Meredith’s back but that’s family for you. They tend to act on what they feel is best for everyone. And that includes April’s mom. The older woman came for a visit because she wanted to help her daughter prepare for the baby’s arrival. And what she ended up doing was buying everything for the nursery.

So April snapped when she saw her mother’s purchases. She told her she didn’t need nor want her mother’s help. And Jackson was forced to intervene before April said something much worse than what she had already let out.

April had thought her mother was being condescending to her by the buying the baby things. But Jackson told her that while she doesn’t need her mom’s help – he does. He had gone into the baby store with his mother-in-law and what he found out was that he didn’t know a thing about having babies. His family isn’t like April’s family. They left most of the raising to nannies while April’s family took care of their own.

So, yeah, April and Jackson need her mom. And Maggie needs a relationship with her father. The sole reason why Maggie had come to Seattle was so she could learn more about Ellis Grey. And no one knew Ellis like Richard did. Not even Meredith.

Elsewhere in the hospital, Owen and Callie were handy a tricky patient. A woman named Melissa had come in. She was badly beaten during a carjacking and later the doctors found out she was veteran. Though there was still a lot more to learn about Melissa.

At first, no once could understand why she simply didn’t hand over her car but Jo had guessed the reason. Jo used to live in a car herself so she was able to recognize the signs. Melissa was homeless. And so Owen tried to help.

He told Melissa about a program that was supposed to help Veterans. Yet Melissa didn’t want to do it. She didn’t feel like she deserved to take a bed away from someone who might really need it. Melissa wasn’t on the frontlines – she was a computer tech so she didn’t want to take services that should go to people who’ve lost limbs or half their face.

But Owen told her that he outranked her. He was in the army too and he ordered her to do as he says. So she’s going to accept help whether she likes or not.

After dealing with Melissa, Jo had needed to talk to Alex. She realized that the place she called home actually belonged to Alex and that she was merely a guest. So what happens if they break up? Will she have to go back to living in her car?

Alex told her that everything between them was good but that might not have been enough to reassure her.

And because the hospital is filled with people that became sick after not eating right or failing to exercise – Bailey decided to start living a little bit healthier. She had lost a patient that had worn out his own stomach lining. So that made her take up jogging. Unfortunately, she injured herself on her first and had to walk with a limp for the rest of the day.

Later, April apologized to her mom. She shouldn’t have been rude to her when she was only trying to help. As for Maggie and Richard; they found themselves forced into spending time together. Derek and Meredith had forgotten about the dinner and were busy sharing a shower while their guests were stuck waiting outside.

But even that wasn’t as rude as some of the things that came out of Dr. Herman’s mouth whenever she was talking to Arizona. Then, when Arizona had finally had enough – she confronted Herman. She wanted to know why the other woman was so hard on her. And Herman’s explanations was that she’s dying.

She’s dying and before she goes she has to prepare Arizona to take over her job.