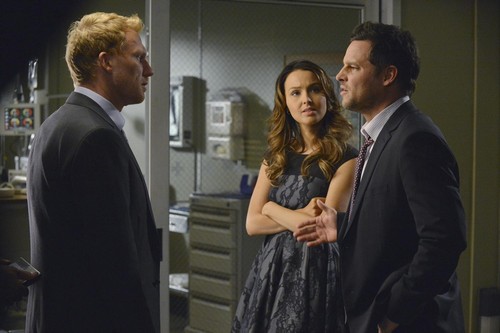 Tonight on ABC GREY’S ANATOMY return with its Spring Premiere called “Take It Back.”  On tonight’s show the doctors react to the events of April’s wedding.  Did you watch the last episode before the winter hiatus?  We did and if you want to catch up we have a full and detailed recap, right here for you.

On the last episode before the hiatus on the day of April’s wedding, the Grey Sloan Memorial doctors were all preoccupied with their own drama. Meredith and Cristina continued to argue about their research and careers, Bailey came clean to Ben about her feelings regarding him moving back to Seattle, and Shane put himself in a risky situation. Meanwhile, Derek got a phone call that would change his life, on the winter finale

On tonight’s episode the doctors face the consequences of the events that took place at April’s wedding. Meredith feels betrayed when Derek goes back on a promise, Alex is furious after returning to the hospital and hearing the news about his father, and Arizona and Callie decide whether or not to move forward together. Meanwhile, Bailey realizes she was wrong about the motive behind Ben’s decision to move back to Seattle.

Tonight’s episode looks like it is going to be a great episode and you won’t want to miss it, so be sure to tune in for our live coverage of ABC’s “Grey’s Anatomy” Season 10 episode 13 at 9 PM EST! While you wait for our recap hit the comments and let us know how excited you are about the season premiere.  Check out the sneak peek of tonight’s episode below!

In conclusion to the winter’s finale shocker, April chose to run away with Jackson and leave her groom standing by his lonesome at the altar. Some were heartbroken like the groom and Stephanie otherwise known as Jackson’s girlfriend and his date to said wedding. While other like Cristina thought Apil was being exceptionally brave and respected her more for the decision. But it’s April that started to get nerves in the parking lot. And its April a couple of hours after the damage she helped caused that suddenly realized she and Jackson don’t have a plan. They broke before and who’s to say that won’t happen again.

Meanwhile at the hospital, Alex is freaking out. He put whatever is going on between him and Jo on hold in order to rush back for his father. He heard what Shane did and he wants him fired or better yet arrested. And if he knew where Shane was hiding out, he might have simply attacked him.

Luckily for Shane, he was sleeping outside during the hoopla. Alex and Jo were so furious that Alex let it slip that of course Shane thought he was close to God. It’s what Cristina has been allowing him to do since they started sleeping together. Owen didn’t like that nor did he like how the board voted to keep Shane on.

When Shane returned after a 3 weeks suspension the hospital was a different place. Alex and Jo hated him for a reason but he couldn’t understand why the Chief of Surgery was treating him like crap as well. Plus things were just odd. April and Jackson weren’t talking to each other. And no surprise there that Stephanie wasn’t talking to either of them. Lately Owen has had to arrange who works with whom to merely keep the peace.

Add to that a human cat then there’s a day at the hospital. A man has gotten tattoos, facial implants, nail extensions, and has done massive dental work in order to become a cat. The cat man naturally frightened a couple of people one day and it led to an accident. A little girl got hurt in the process and he feels really bad about it.

He tried to ask how she was and was told it was privileged information. So he waited until his doctors (Stephanie and Callie) were out of the room and went to go find the little girl to apologize. She was asleep during most of it and awoke to find a rather scary standing over her bed. She screamed, he screamed, and then Arizona came into the room and screamed.

Poor Arizona! She was such a good day. Arizona talked Callie after the wedding. She said they never gave each other a real fresh start. Now that’s what’s they’re choosing to do. They want to go ahead with a new house. Arizona found one she loves but Callie is starting to have cold feet about it and it unfourtanetly has nothing to do with someone dying in the house.

It’s a good thing that the Cat man is keeping her hands full. The cat man known as Robert did all of this to himself when he was 19. It’s over 20 years later and he hates what he did. He doesn’t have any friends and can barely work up the courage to leave the house. He’s a basically a shut in because of his stupid teenage actions.

Stephanie felt sorry for him. So sorry that she went to Jackson and asked him to take on Robert’s case. It was the first time she spoke to him since “the Wedding” but she feels that Robert at least deserves a second chance.

Shane only wishes he would receive a second chance. Owen kept on guilt tripping all day long that Shane lost confidence in himself. Richard tried to get Owen to back off and he refused. It finally pushed Shane into doing what he should have done. He went to Alex and tried to apologize for Jimmy. Although he did have poor timing.

Alex’s father is dying and he wanted to see his wife and son. Alex felt bad enough that he tried to help but he couldn’t. The wife, Naomi, had to be dragged to the hospital under false pretenses. Alex told her that Jimmy was had already died. By time Naomi arrived she was disappointed to find her husband still alive. She stole back her guitar and left.

Jimmy wasn’t awake while she was there and to protect his feelings Alex had to keep on lying. He said she and the boy were coming any minute. So it really wasn’t the best time for Shane to say sorry. Alex attacked him and Meredith and Cristina were forced to intervene.

The hospital has become a place of temper tantrums and complicated entanglements. Frankly, Leah is sick of it all. She had to work with Jackson and she couldn’t stop glaring at him. When she ran into a crying Stephanie, Leah told her that maybe someone should do something. The superiors can’t keep doing this to the residents. It was time somebody took a stand for what Arizona did to her and for what Cristina did to Shane.

Cristina is actually one of the few people that was able to comfort Shane. She told him that went through a dark time but he is an amazing doctor. Yet she got called to an emergency board meeting.

So too did Meredith and Derek. Which is lucky for Derek because it broke up their fight. Meredith is angry that her husband is willing to renegade on their deal. She doesn’t even care that’s it’s for the President for the United States. She’s in a good place with Cristina and now the two women can harp on him together.

The board meeting was called because of a complaint got filed. The person claimed sexual harassment and hostile work environment. Everyone at the table automatically turned towards Jackson. But there is nothing he can do to rectify the situation. That’s why Owen asks them to implement a new policy. No more dating your co-workers. Unless you’re already married, no one can start or continue with inter-office dating.

That leaves Alex screwed. He asked Jo to marry him and she hadn’t known she had say to that. She thought he was saying something about his father. Once she realized that it was a proposal she told him she couldn’t marry him. As it happens it turned out to be the same day his father died.

Then there’s Bailey. She’s doing better and her marriage is getting stronger. It seems all she needed to know was that her husband didn’t just give up on his dream. He came back to town for his family. So there goes another marriage protected by the new rules.

Yet Jackson appears to be in the clear too. The whole thing about him and April not talking at the hospital was to throw everyone off of their scent. In truth he asked her to marry him. Whether they got married or not remains a mystery.