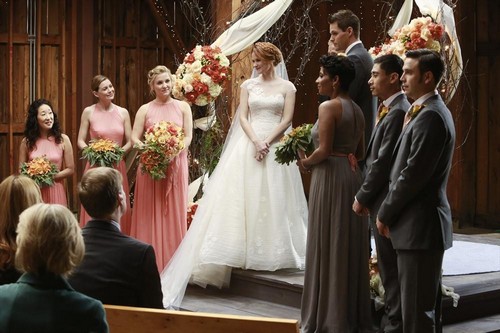 Tonight on ABC GREY’S ANATOMY continues with another new episode called “Get Up, Stand Up.”  On tonight’s show April’s wedding day has arrived.  Did you watch last week’s episode?  We did and if you want to catch up we have a full and detailed recap, right here for you.

On last week’s episode April’s sisters arrived to help celebrate April’s upcoming nuptials and quickly got on her nerves. Matthew and Jackson was forced to work together when they witness a terrible accident, Callie and Arizona worked hard to reestablish their relationship and Cristina was pressured to live stream an upcoming surgery. Meanwhile, a familiar face returned to the hospital.

On tonight’s show on the day of April’s wedding, the Grey Sloan Memorial doctors are all preoccupied with their own drama. Meredith and Cristina continue to argue about their research and careers, Bailey comes clean to Ben about her feelings regarding him moving back to Seattle, and Shane puts himself in a risky situation. Meanwhile, Derek gets a phone call that will change his life, on the winter finale.

Tonight’s episode looks like it is going to be a great episode and you won’t want to miss it, so be sure to tune in for our live coverage of ABC’s “Grey’s Anatomy” Season 10 episode 12 at 9 PM EST! While you wait for our recap hit the comments and let us know how excited you are about the season premiere.  Check out the sneak peek of tonight’s episode below!

April’s wedding is in a couple of hours; most of her fellow doctors are pushing and rearranging things as much as they can, but that only solves their professional lives. The same can’t be about their private ones. Cristina should be accepting praise and yet she’s caught downgrading her own successes in order not to make Meredith feel bad. And it’s not all in her head either. When she was giving a press conference, she looked out into the audience and saw Meredith’s face. Her former friend looked like she was sucking on a lemon.

Shane had to step in to give what they did, a groundbreaking surgery; it’s due. He thought he was covering up Cristina’s nervousness, but she saw something in him she recognized. Last week, she wanted to discount Meredeth’s worries on Shane when all she needed to do was asking him out right if anything was wrong. She quickly learns the answer after witnessing how defensive he was willing to get with her.

Owen doesn’t see the many problems going on with the doctors. He didn’t spot any of their problems even when he was warned. Jo had gone to him a while back to explain Ale’s dilemma with his father. He brushed it off and made sure the doctors were still working. If their work is up to standards then he won’t step in like he did with Bailey.

Bailey got the help she needed to do her job, but she’s not well just yet. She’s scared to trust herself in the Operating Room much to Leah’s frustration. Probably too much seeing as Leah went off on Bailey. She gave her teacher a stern semi-speech. It seems she hasn’t been getting enough surgical hours and she was fed up feeling like she was getting left behind everyone else. Specifically, she doesn’t want to behind the other interns otherwise known as her friends with the more efficient mentors. After that little rant, she was expecting that old Bailey’s temper when instead she got the chance she was begging for. Bailey allowed her to take center stage in their surgery.

April had to go to the hospital to collect her bridesmaids but she was short on time. She arrived with the rollers in her and completely bare faced. Not her best look by far although it does help ease the tension with Jackson. He might have been too caught up laughing to realize he agreed to go to her wedding. Hopefully, he’ll find time to tell Stephanie, so she has enough time to prepare.

Maybe he should do it right their surgery together. They’re working on a man with, not to downplay it, severe throat problems. Their patient is a funny guy and when they saw him with his wife helps lighten up the mood around the hospital.

For the mood is intense there. April had to personally deliver both Cristina and Meredith to the seamstresses. Her ever supporting bridesmaids never got their dresses fitted. When she leaves them to it, the ladies decide to talk to each other. The snide and backhanded remarks were benched for about a minute. Then Cristina made the mistake of appearing vulnerable to Meredith. She thought her old friend would comfort her like she used to. Oh, how she miscalculated!

Cristina told Meredith she didn’t know why her surgery was a success. It was a fluke that her patient even survived the procedure. Meredith thought it was arrogant that Cristina is accepting praise for what could have been an accident. Shane interrupts their argument for a second. He had to because he couldn’t hold his excitement in. It looks like Cristina is going to be nominated for a prestigious award. He leaves her with what he thought was great new but he left her in Meredith’s company.

The award draws the official line in the sand for them. Meredith knows Shane is sleeping with Cristina. She was able to figure that out when he showed no qualms over seeing Cristina in her underwear. So Meredith says Shane is exactly like Cristina; willing to sleep with the best teacher like Cristina did all throughout Med school and her internship. While according to Cristina, Meredith became like the person they used to laugh about.

Jackson and Stephanie lost their patient. He’s technically alive but is unable to communicate or move.

Derek and Owen had a meeting with some big shots who wanted to borrow Derek’s name for a project of theirs. He said no which made Owen upset with him. He feels like he’s the only one constantly running around to find the money the hospital so obviously needs. He doesn’t understand why Derek let this opportunity slip through his fingers. Derek makes his choices now based solely on giving Meredith the extra time she needs with her research.

Leah got advice from Bailey. Bailey told her that she had to fight for what she deserved. Bailey later on took her own advice when she told her husband that even though she’s been sick; she at least didn’t walk away from her career. It was because of that decision that he made entirely on his own that her symptoms got worse. No place like at a wedding to help put a marriage straight.

The bridesmaids were “helping” April get ready when Meredith and Cristina chose, for once, to be adults and lay down their weapons. They were talking and not arguing when April had to call a halt to their love fest. She’s been putting up with Arizona’s frustrations with Callie and one more sob story would have been too much. She told them to keep the focus on her and that’s it!

Leah and Shane were the only two in the immediate area when Alex’s dad went into cardiac arrest. Leah wanted to get an attendee, but Shane swore he had the situation under control. He freaked out in OR and nothing Leah could say would help remember this was a new patient and not Heather. Leah had to get Richard to come and help their patient.

Derek may have to go back on his promise to be a supportive husband. He got a call from the President of the United States. So of course, he got a call in the middle of April’s wedding. No “Grey’s Anatomy” wedding is anything unless there is a major shocker. Derek’s surprise was just the appetizer. The real event was when Jackson interrupted the wedding. He had to it seems because he was in love with April and he felt she still had feelings for him too.

Does she? We’ll have to wait all the way to January to find out her answer.