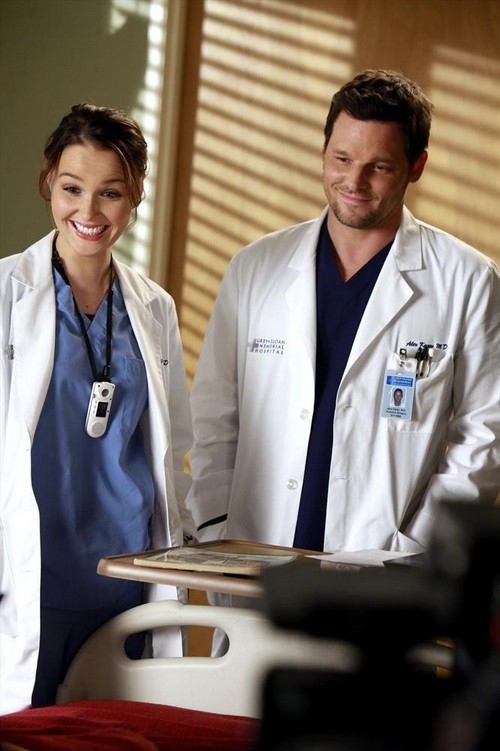 Tonight on ABC GREY’S ANATOMY returns with a new episode called “Throwing It All Away.”  On tonight’s show Arizona is faced with a physically and emotionally difficult day.  Did you watch the last episode?  We did and if you want to catch up we have a full and detailed recap, right here for you.

On last week’s episode after an anonymous complaint was issued by one of their own, the hospital implemented a non-fraternizing policy causing the couples to panic.  Meanwhile, Emma and Owen talked about the future, Cristina and Meredith enjoy a little girl time and Richard enlists the residents to help research a rare cancer case.

On tonight’s episode Arizona has a bad day which escalates when she advises one of Callie’s patients on a potential double amputation. Derek goes back on a promise to Callie, and Jo and Stephanie come across an abandoned baby outside the hospital. Meanwhile, the doctors deal with the repercussions of the non-fraternization rule, which include meetings with HR and one doctor’s suspension.

Tonight’s episode looks like it is going to be a great episode and you won’t want to miss it, so be sure to tune in for our live coverage of ABC’s “Grey’s Anatomy”Season 10 episode 143 at 9 PM EST! While you wait for our recap hit the comments and let us know how excited you are about the season première.  Check out the sneak peek of tonight’s episode below!

Stephanie just can’t handle her work life right now. She found out about the secret marriage and is feeling so low about herself that she’s hiding whenever she spots one of the dreaded two. It’s why she actually wants the deal Jo has. And Jo only got it as a punishment. As a repercussion for their insubordinate flaunting of the new dating rules, Jo and Alex aren’t allowed to work together. And on top of that Alex is removed from all surgeries for the next few days.

But talk about a punishment for Arizona. She already has to deal with HR because of Leah’s complaint and now she’s forced to find a new doctor to do surgeries with. In the end she went with longtime friend Bailey but it’s really is the principle of thing.

Arizona got a kid that needs a hole to be drilled into his intestines and on top of that there was a baby that was dropped off at the front doors. Stephanie and Jo found him by the trash cans as they were talking about Stephanie’s feelings. Weirdly enough Stephanie was just saying that she felt like Jackson had thrown her away like someone’s trash when she heard the baby’s cries.

She later was force d to deal with him though in one of those pesky elevator moments. Jackson tried to be nice by asking about the baby and she got an attitude with him. Stephanie told him that the baby was thrown away and probably won’t be alright because of that. Way to bring your personal issues to work there Stef!

Cristina is going to be helping Arizona on the baby case. Although Richard has also put Shane on the case. He said that he thought it would be good for Shane. While Cristina is worried that whatever she did or not do for Shane will crop up again. And the last time that happened he cracked.

The baby they’re working on has had surgery before but it looks like he was going to need even more surgeries in his young life so it’s safe to assume his family abandoned him once they realized he’ll be too much work. Shane happens to make this guess when he was in surgery with Cristina and by the way she looked at him afterwards she thought he was speaking about more than just the infant.

Derek has to find a way to tell Callie that they can’t pursue their project anymore. Since part of his work and his invention went into their project; the government is telling him that he has to shut it all down. Yet that’s hard for Derek because he will be taking everything away from Callie – how do you tell a friend that not only is she getting ditched, but she won’t be able to keeping doing a project she’s been working months on?

And he can’t got to Meredith seeing as she has her own problems to deal with. Meredith tried to get Alex back on surgery and Owen in a sadistic twist decided to give her the surgery Alex has begging to do.

It’s safe to say that Callie didn’t take Derek’s news well. She’s had too much on her plate recently and then to be dumped for someone else (yet again) has to hurt. Earlier a patient of hers was demanding to have her legs amputated and Arizona agreed with the pre-teen in treatment. Well, Callie has been working on this kid’s case for a while now ( try three years) and still wants to search for other methods besides amputation. But the patient and her father went with Arizona’s assessment.

So by this point, Callie’s day has pretty much gone to hell only to then realize that the best had been plainly saved for last. The complaint Leah made wasn’t against Arizona. No, HR explained to Arizona that Callie was the one cited for a hostile work environment.

Callie had to give up the double amputation surgery just to sit in with a meeting with HR. Which leaves Arizona to do the surgery with the help of a resident – Leah! Arziona wanted to be though she soon realized that she couldn’t hold grudge against Leah. Not with the other woman honestly being in the right for citing Callie. Leah had a point with that.

Arizona shouldn’t have revealed their short relationship to her wife. It wasn’t a serious relationship and it put Leah’s career at risk.

Another person that was called in for a meeting with HR was Stephanie. She accidentally hit Arizona with a gurney and knocked her over. Now that was purely by chance, but the same can’t be said when she hit Jackson with a gurney later on. Because it’s Jackson everybody thinks she did it on purpose. Even April and her new husband have their doubts.

April had to deal with a friend of her brain dead patient. He had donated a kidney to the friend and now wanted it back. He wouldn’t take no for an answer and kept on hounding April wherever she went. He only gave up once his friend died – you see he didn’t necessarily want the organ back but he needed a way to vent out his frustration about losing his friend.

Cristina finally gave Shane his due. She called him a good doctor and it wasn’t out of pity. She said it knowing it was the truth. And her working with Shane didn’t appear to faze her ex-husband. Apparently he didn’t dump his dream girl for another chance with Cristina. He did it simply because he realized she wasn’t right for it.

As for Cristina, he knows why they slept together and it wasn’t to start their marriage up again. The only people that are constantly doing that are Callie and Arizona. With those two it’s almost like every week they have to promise each other a start over!