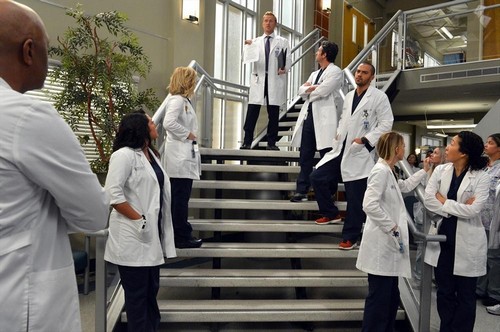 Tonight on ABC GREY’S ANATOMY returns with a new episode called “You’ve Got To Hide Your Love Away.”  On tonight’s show the hospital calls for no fraternizing.  Did you watch the last episode?  We did and if you want to catch up we have a full and detailed recap, right here for you.

On last week’s episode the doctors faced the consequences of the events that took place at April’s wedding. Meredith felt betrayed when Derek went back on a promise, Alex was furious after returning to the hospital and hearing the news about his father, and Arizona and Callie decided whether or not to move forward together. Meanwhile, Bailey realized she was wrong about the motive behind Ben’s decision to move back to Seattle.

On tonight’s episode after an anonymous complaint is issued by one of their own, the hospital implements a non-fraternizing policy causing the couples to panic. Meanwhile, Emma and Owen talk about the future, Cristina and Meredith enjoy a little girl time and Richard enlists the residents to help research a rare cancer case.

Tonight’s episode looks like it is going to be a great episode and you won’t want to miss it, so be sure to tune in for our live coverage of ABC’s “Grey’s Anatomy”Season 10 episode 143 at 9 PM EST! While you wait for our recap hit the comments and let us know how excited you are about the season première.  Check out the sneak peek of tonight’s episode below!

The Hospital’s new policy was implemented and not a lot of people were happy to suddenly find their bosses snooping around in their dating lives. Owen should have dealt with any remaining questions but chose the cowardly way out it. He gave Richard the responsibility of dealing with the residents. It doesn’t sound too although it becomes much harder when Jo start gets angry.

Her fellow residents don’t seem to care but she does. She’s not married to Alex so her relationship falls under the new rules jurisdiction. Richard tried to be rational with when he lost some of his composure. He told her it was one of her own that made a complaint that led to the new rule. He used “anonymous” but she knew who he met.

There is only one girl currently holding a grudge against an ex she still has to work with. Thanks to Richard now everyone knows the rule is Stephanie’s fault!

She was hurting after what April and Jackson did to her but she doesn’t even know the full truth of it yet. April and Jackson are married and they’ve been hiding it from everyone back at the hospital. They’re so deep cover that they tend to hide their rings and try to avoid each other at all costs. However a new patient is ruining that plan.

A patient came in that was found in the dumpster. She only got in the dumpster because she dropped something and she possibly wasn’t in the best frame of mind after her married lover kept on ignoring her at an office party. She sounds crazy but her story of a secret relationship happens to hit closer to home for the doctors than the patient.

A secret love affair sounds romantic until all parties have to live out the realities of the situation. And it seems like everyone is doing it. Jo and Alex stage a huge fight and breakup in front of the whole hospital- that way they can go on seeing each other without stepping on anyone’s toes. To be fair that plan can work at the hospital but what about when they’re at home. Navigating pass Cristina is going to be hard.

If they’re lucky maybe Cristina’s own dating life will keep her busy. She recently found that her ex-husband she’s still in love with is moving in with girlfriend, Emma. How nice – that’s the lie she tells herself and to Meredith. But if she really wanted Owen to move on then showing up drunk at his door, knowing exactly what she wanted, was not the best idea.

Did no one think about Emma? You know the girlfriend that’s currently thinking up how many rooms will she and Owen want in their new house. Because she wants extra rooms for the kids she wishes to have. Preferably three of them that she already knows she’ll want to cut back on her work hours for.

What about Emma? Is it better for her to live a lie? She might just unknowingly have to. Owen didn’t have the guts to tell her want he did. He’d rather agree to see the real estate agent than tell her something that could destroy Emma’s dream.

Alex and Callie’s patient had gone through to bouts of cancer. So after running some genetic tests the doctors were able to find a rare mutation in her genes. This led to her parents calling family members to get tested but their patient younger sister doesn’t want to find out if she has a mutation. She wanted to live without knowing.

Though she’ll may change her mind after witnessing her sister flat line. It was the interns were on the job. They were the ones that were supposed to all come together to find a way to save this girl but they got caught up in their own mess and didn’t pull themselves out until after the patient had died.

Ben, Shane, Stefanie, Jo, and Lena- they were merely too busy that day. Jo had partially found out about April and Jackson. As in they were still together just not the married part. So what did she do with the news- she brought it to Stef. Jo told her because she wanted to let Stefanie that she wasn’t punishing them with the new rule. It was only her own life that was getting wrecked.

Meanwhile Leah couldn’t standby and watch Stefanie take the blame anymore. She was the one that issued the complaint and she didn’t do it because of a broken heart. Leah made the complaint because her medical education was at risk.

Later the board pulled in offender for a meeting. They called in Alex, Jo, April, and Jackson seeing as they were all caught by Richard in a supply closet. Yet the board was in for a shock because Alex refuses to be dictated to. He said none of them were any better than he was so he wasn’t going to listen to what they had to say. Then he walked after daring them to do something.

Pretty bad ass for a resident. Although he did forget the part that Jo is still an intern. She had to stay seated at the table to hear how it was just her that was in trouble seeing as April and Jackson are married.

Owen broke up with Emma. He gave her excuse instead of the truth but she’s smart enough to guess the real reason her own. He isn’t over his ex-wife and that’s that!

Derek got the job with the White House and its better than he imagined. The President wants him to run a special board and Meredith realizes her career won’t mix well with his. She’s happy for him – as his colleague and his wife but what will happen to them?