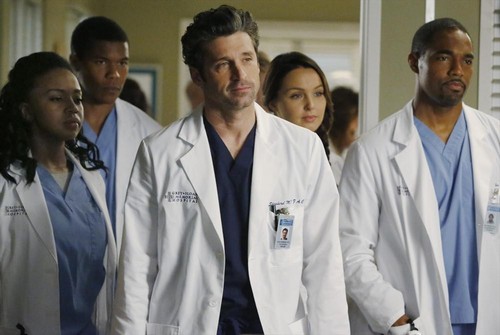 Tonight on ABC GREY’S ANATOMY returns with a great new episode. In “Go It Alone,” pressure mounts for Derek both at work and home. Meanwhile, Meredith helps Cristina write an acceptance speech in case she wins an award; April and Jackson are at odds over big marital issues; and Callie and Arizona attempt to reestablish their bond.

On last week’s episode Cristina was nominated for a Harper Avery and although most of her fellow doctors were ecstatic, she wouldn’t let herself get too excited. Bailey continued to work on a young boy without an immune system — Alex considered making a change, and Derek and Callie worked with a machine that could recognize emotions. Meanwhile, Richard gave the residents a pep talk about the exciting projects going on around the hospital.  Did you watch last week’s episode?  We did and we recapped it right here for you.

On tonight’s episode Cristina enlists Meredith to help her prepare an acceptance speech for her possible Harper Avery win and while Owen offers to attend the ceremony with her, she insists on going alone. Meanwhile, Derek feels overwhelmed between his responsibilities at home and at the hospital. April and Jackson come to a disagreement on children and religion, and Callie and Arizona try to reconnect in their marriage.

Tonight’s episode looks like it is going to be a great episode and you won’t want to miss it, so be sure to tune in for our live coverage of ABC’s “Grey’s Anatomy”Season 10 episode 20 at 9 PM EST! While you wait for our recap hit the comments and let us know how excited you are about the season so far.

Tonight’s episode of Grey’s Anatomy kicks off with Cristina packing her bags for Boston, she leaves tomorrow for Harper Avery. Owen invites himself along, but Cristina tells him it isn’t necessary. He offers to help her write her speech, but she says that isn’t necessary she is going out with Mer to have drinks and Mer will help her write it.

Jackson and April are treating a young girl named Jill that got bit by her dog. Jill is deaf, and so is her Mom, but her Dad can hear fine. While Jackson is stitching Jill up he mentions to her parents that they should consider a cochlear implant so that she can hear. The Mother freaks out (via hand-signals) and her husband translates that it isn’t an option there is nothing wrong with their daughter.

An older man has come in by himself, his wife is at home. He had altercations with his gastric bypass. Mer is stuck babysitting him all night to make sure he doesn’t have any post-surgery problems. She breaks the news to Cristina that she can’t go out with her and have drinks while they write her speech. Cristina tries to drag Alex out with her, but he is working also.

Adele is busy working on her patient Brady. She is extracting genes from his bone-marrow and injecting them with a mutated version of the HIV virus which is supposed to help his white blood cells reproduce.

Jackson and April head home and sit down for dinner. They get into a heated argument over whether Jackson was right or wrong to encourage the parents of his patients to get her a cochlear implant. April thinks that he crossed a line and somehow their argument escalates to him not respecting her beliefs.

Sabene heads down to the cafeteria to get coffee. While she is gone Cristina stays with the kids. When she returns Cristina is tending to Ivy who has spiked a fever and is having difficulty breathing. Cristina informs Sabene that Ivy is rejecting her new heart.

Mer’s gastric bypass patient has gone into shock and is bleeding profusely and unconscious. She rushes him to an operating room and on the way finds out that Derek is in another operating room. She begins freaking out because he was supposed to pick up the kids from daycare and if he is at the hospital then no one picked them up. She has one of her assistants call his phone back to back while she tries to fix the gastric bypass patient. Meanwhile Derek and his team of undergrads are pulling a pair of scissors out of a man’s head that came into the ER.

Derek pawned the kids off on Arizona and Callie, who are currently skipping date night to babysit them and argue over which one of them will be carrying their next child if they get pregnant again. Derek and Mer finally catch up with eachother and he reassures her the kids are fine and they are at Arizona and Callie’s house.

While Cristina is in the OR with Ivy, Alex finds her sister Frankie unconscious in the hallway and rush her up to another OR. While Cristina is working on Ivy and Frankie she rehearses her harper Avery speech on Mer and Alex who both wound up working over-nighters with her. Ivy and Frankie are both on the heart transplant list now. Cristina braks the news to Sabene that Ivy is rejecting her heart and Frankie has gone into heart failure.

Mer and Owen walk Cristina downstairs to wait for a cab to the airport. Owen is still hinting at joining Cristina in Boston but she doesn’t want to hear anything about it. She sends him back upstairs and then gets in her cab.

Once she is done seeing Cristina off Mer visits Derek and he apologizes about not telling her where the kids were. Derek confesses that something needs to change-they are doing too much.

April shows up on Callie and Arizona’s doorstep in the early morning and asks if she can stay with them for a while, apparently she and Jackson didn’t make up last night.

Cristina arrives in Boston at the Harper Avery ceremony. When she walks in she is like a celebrity, doctors from all over the country start introducing themselves and asking her about her latest work. Cristina freaks out and calls Mer, she realizes she made a huge mistake by not bringing anyone with her. She hangs up and heads into the dinner upset and finds Owen and Mer waiting for her at the table, they knew all along that she was going to need them there.

It’s finally time for the Harper Avery award to be handed out. The presenter takes the stage and announces the winner…and it isn’t Cristina.