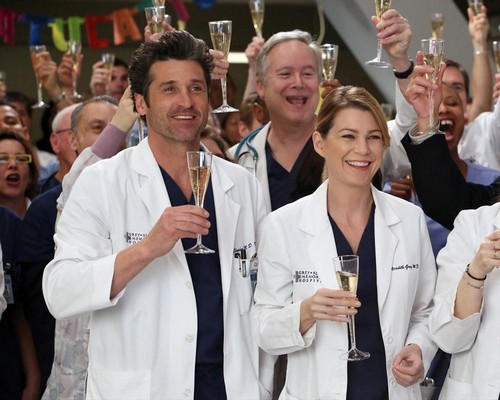 Tonight on ABC GREY’S ANATOMY returns with a great new episode. In “I’m Winning” Cristina is nominated for a prestigious award and remains calm amid all of the excitement. Meanwhile, Bailey tries to help a boy who doesn’t have an immune system; Derek and Callie use a machine that recognizes emotions; and Richard delivers a pep talk.

On last week’s episode the hospital got inundated with flu infected patients, which caused the doctors to slowly fall ill one by one. Derek had to fight off the sickness as he prepared to give a speech on brain mapping and the residents placed bets on who would fall ill first. Meanwhile, a new doctor at the hospital gave Alex a glimpse into an alternate form of medical practice.  “You Be Illin” was written by Zoanne Clack and directed by Nicole Rubio.  Did you watch last week’s episode?  We did and we recapped it right here for you.

On tonight’s episode Cristina is nominated for a Harper Avery and although most of her fellow doctors are ecstatic, she won’t let herself get too excited. Bailey continues to work on a young boy without an immune system — Alex considers making a change, and Derek and Callie work with a machine that can recognize emotions. Meanwhile, Richard gives the residents a pep talk about the exciting projects going on around the hospital.

Tonight’s episode looks like it is going to be a great episode and you won’t want to miss it, so be sure to tune in for our live coverage of ABC’s “Grey’s Anatomy”Season 10 episode 19 at 9 PM EST! While you wait for our recap hit the comments and let us know how excited you are about the season so far.

Braden Morris otherwise known as the boy in the bubble is still trapped inside his safe enclosure. But at least he’s made a friend. He quickly befriended Francesca McNeil and because she has stick around the hospital – he knows he won’t be so alone.

His parents have tried to be there for him. Though they can’t themselves from getting emotional every time a new treatment for him fails. So thankfully he has Francesca.

Cristina has yet to find an answer behind Francesca’s family’s illness. And while Francesca and her sister Ivy have both recovered and/or improving from the mystery illness that started to deteriorate their hearts – their brother’s condition on the other hand only gets worse. Link is now waiting on essentially a miracle.

While in happier news, Cristina’s research was recognized and she’s been nominated for a Harper Avery. Meredith had thrown her a big surprise champagne toast at the hospital and it went along way towards their friendships. Remember they nearly came to blows over simple matter of jealousy so the fact that Meredith planned a party meant that no matter what their friendship came first.

Cristina was still accepting good wishes when Link started to flat-line. Cristina was able to save him however she doesn’t have any good news for his family. The miracle they were waiting on has been denied by the FDA.

Meredith learned a little something about friendship and she did so with the help of her patient. He was supposed to have gotten a kidney transplant from his best friend, but at the last second his friend decided not to risk his own life during the procedure. So he chickened out and Meredith and Leah then had to cover for him.

And after that, Meredith found herself playing messenger for Bailey. Bailey is currently working on another alternative treatment for Braden and she claims not to have time to congratulate Cristina herself. So she asked Meredith to do it for her.

It was an odd request and even Shane thought so. He had to swap with Stephanie because of the favor he extracted from her last week and now he’s stuck watching Bailey on a computer for hours on end. If anything why couldn’t she have sent him to pass on the congratulations?

It wouldn’t have ended well for him seeing as Cristina has given up basking in the limelight by then, but Shane could have escaped for a couple of minutes.

Cristina’s patient has run out of options and his family didn’t take that news so well. Link’s parents were told that they had to wait out the last remaining days. Francesca was especially disappointed because she had viewed Cristina as a miracle worker and she couldn’t understand why the doctor that’s been nominated for an award was suddenly unable to find a way to save her brother.

The young girl was so upset that her new friend chose to cheer her up with a game. Braden escaped confinement to play tag with Francesca. And it sent both his parents and his doctors into a panic.

Alex had to shut down the hallway in order to get Braden safely back to his room. Apparently he had lied to Francesca and told her that he had gotten better. His friend was upset about possibly hurting him when she and her family received great news about her brother.

The FDA soon changed their minds once they realized Cristina was the one asking for a new device for one of her patients. She hasn’t won yet and already people are bending over backwards to please a Harper Avery nominee.

The device Link needed had to be transported in a hurry and so the hospital had to get a private jet. But 25,000 is something that has to be run pass the board and Link didn’t have the time for all of that so Jackson gave Jo his credit card. He said he’ll settle the bill later with the board. Though Alex wasn’t too pleased at watching Richie Rich in action.

Here he is struggling meanwhile Jackson had 25 grand on his credit card. And that’s what finally pushed him into going to a private practice. It’s not like Alex can pay his bills staying around the hiospital.

Jealousy is an ugly thing. And Meredith wasn’t exactly over hers. She had to watch Cristina get fawned over and perform a risky new surgery even as her surgery was back on the board. The kidney donor changed his mind again although now the patient asked for a different doctor. He thought Meredith reading the file wrong was a bit too incompetent. So she lost her own surgery and still managed to be there for Cristina.

Meredith never got over the jealousy part but because she planned the champagne toasts no one is going to suspect her of being jealous just like she planned. And as for Bailey, she worked up the courage to congratulate Cristina in person. But she was only able to do it after her own research reached a breakthrough. Now she has Stephanie and Shane fighting each other over who will help with Bailey’s research.

Callie has decided she wants another baby and Arizona quickly agreed. They both want this second child, but now they have to figure out who will carry it.