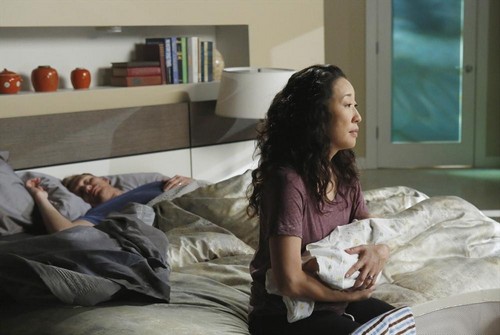 On last week’s episode Cristina imagined the two routes her life can take based on one decision she made. Meanwhile one of the hospital’s patients decided whether or not to live.  The show guest stars are: Anne Dudek as Elise Castor and Charlie Hofheimer as Jason Castor.  Did you watch last week’s episode?  We did and we recapped it right here for you.

On tonight’s episode the hospital gets inundated with flu infected patients, which causes the doctors to slowly fall ill one by one. Derek must fight off the sickness as he prepares to give a speech on brain mapping and the residents place bets on who will fall ill first. Meanwhile, a new doctor at the hospital gives Alex a glimpse into an alternate form of medical practice.  “You Be Illin” was written by Zoanne Clack and directed by Nicole Rubio.

Tonight’s episode looks like it is going to be a great episode and you won’t want to miss it, so be sure to tune in for our live coverage of ABC’s “Grey’s Anatomy”Season 10 episode 18 at 9 PM EST! While you wait for our recap hit the comments and let us know how excited you are about the season so far.

Owen warns the staff about a viral infection running through the hospital and yet none of the doctors are taking any extra precautions. Leah at least tried to be careful. She knew she was sick and was about to go home early when Richard stopped her.

According to him, doctors don’t get sick. That’s what the patients are for. And, well, the patients are coming in by the dozen. The stomach bug floating around has literally put people in every corner of the hospital so it won’t only be Leah rushing to the bathroom to be sick.

Others doctors are starting to get infected as well. Derek has a big day ahead of him with this speech he has to give, but he’s running a temperature. And the same goes for Jackson. He’s unwell and, like all the others, he’s pretending he can still push through with his shift. When what he should be thinking is that maybe he shouldn’t be around his wife right now because she can’t afford to carry any germs with her into her patient’s room.

April’s patient is susceptible to infections. So he kind of came in on the worst day possible. April had to isolate him and his own parents have to keep changing their hospital garb every time they see him.

Shane is also force into taking drastic actions. Cristina’s trial patients have to make it through one more day with little interference for the trial to be complete. And that won’t happen if say one of the patients would get sick from the flu. So Cristina put Shane in charge of them and he was stuck finding a way to corner off his three patients inside of a crowded hospital.

He did it but not without some trouble!

Cristina wanted to do it, but she had to handle a heart transplant. Her patient has been on the waiting list for four months and this was what the family had been dreaming about ever since. That’s why it wouldn’t hurt if Cristina was a little bit more excited about a heart transplant instead of wasting her time complaining about saving someone’s life.

The case only managed to grab her attention when her patient’s little sister came in with the same heart failure that lead to the eldest getting a transplant. And that’s weird because normally something like that doesn’t happen.

As for Shane, he got sick or so he claimed. He traded with Stefanie in order not to compromise his patients. Then she later caught him sleeping in the commons room and decided to check his temperature his self. And you know what? He was perfectly fine while she was the one that got stuck changing diapers.

Leah chose to hook herself up to her very own IV. It was the only way she could stay conscious in the Operating Room with Meredith, Richard, and their patient. But eventually the other doctors began pushing her buttons.

They were talking about puss and fecal matter so of course Leah got sick. She actually ended up vomiting in the OR. Although Meredith and Richard insisted afterwards on her going home.

Derek should have also gone home. He had to perform brain surgery on April’s patient and because was sick they made him wear a biohazard suit during it. He made it through the surgery and just didn’t have enough energy to make it through his speech.

Derek passed out in the hallway and his wife had to admit him at the hospital as a patient. When he came to he found out that Meredith did the speech for him. Just because she wasn’t on board with his choice in the beginning doesn’t mean that she wants Derek to lose his chance at working for the President!

It was too big of an opportunity to pass up. And luckily for Alex, he received a similar offer. His fellowship is almost up and he got an offer from a private practice. If he joins then he’ll be able to get out of student debt in less than 20 years.

Jo wants him to take the job. Which is odd seeing as she’s starting to question whether or not she wants to keep focusing on PEDs anyways. She was with Callie this week and she experienced an adrenaline high after she reset a bone. It looks like she found a way to channel all her pent up anger issues into her work and this could be the start of something new.

Cristina’s patients, the sisters, didn’t have any genetic markers for heart failure and yet they got in any way. And what makes it worse is that the little brother is now showing symptoms.

Then there’s April’s patient – he might have to live his whole life firmly isolated. If he leaves the closed off area then he could likely die. But trying telling that to a kid that dreams of playing outside.