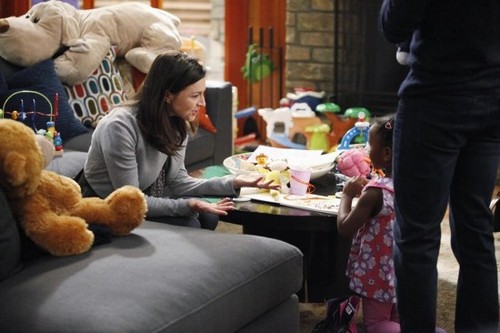 On last week’s episode Cristina enlisted Meredith to help her prepare an acceptance speech for her possible Harper Avery win and while Owen offered to attend the ceremony with her, she insisted on going alone. Meanwhile, Derek felt overwhelmed between his responsibilities at home and at the hospital. April and Jackson came to a disagreement on children and religion, and Callie and Arizona tried to reconnect in their marriage.  Did you watch last week’s episode?  We did and we recapped it right here for you.

On tonight’s episode the doctors receive bad news from Jackson. Meanwhile, Amelia arrives in Seattle for an unexpected visit; Richard heads to Boston to surprise Catherine; and Bailey makes a bold decision after growing disappointed with the lack of progress in her research.

Tonight’s episode looks like it is going to be a great episode and you won’t want to miss it, so be sure to tune in for our live coverage of ABC’s “Grey’s Anatomy” Season 10 episode 21 at 9 PM EST! While you wait for our recap hit the comments and let us know how excited you are about the season so far.

Cristina isn’t taking her loss well. After losing out on a rare opportunity to win the Harper Avery Award – she tried to hide. But this left her patients at risk. The McNeil child still needed a lifesaving surgery so now wasn’t time for Cristina to be playing hide and seek. Luckily she realized that before it was too late and arrived in time to do the surgery herself rather than pass it along to another doctor.

Cristina is trying to take the high road and that’s why she’s remaining professional.

Meanwhile Meredith is the one getting angry for her. She came back to the hospital and found April. Sweet April who wanted to pass along a sympathetic message to Cristina.  However April is an Avery through her marriage to Jackson so Meredith tried to warn her away and when that didn’t work – she cut April left, right, and sideways.

And funnily enough, April isn’t such a big fan of the Averys either. She’s been spending the night with Callie and Arizona. April has been fighting with Jackson over everything it seems. They disagreed on religion and children so the Harper Avery award is just one more argument for them.

Then Jackson mentioned the foundation. He said they’ll be looking into the research projects and soon they’re going to start cutting certain ones that haven’t proved their worth. Well, April was angry at hearing that. To her it sounded like that not only did they deny Cristina the award, but they also wanted to take her research project away as well.

Bailey’s research project might be at risk too. The patient she was going to use as part of her trial has parents that are a little bit unwilling of pushing their son further. Braden Morris has been through so much already that his mother just wants to take him home. She doesn’t want to risk treating her son with HIV. Yeah, he could get better, but that’s gamble she’s not willing to take.

Mrs. Morris was chatting with Mrs. McNeil and that’s where she got the idea of taking her son home. Sabine McNeil has three kids and they’re all in critical condition. Frankie’s body is rejecting her heart transplant while the other two are still awaiting treatment. But Cristina can’t handle them all at once.

She left surgery to check up on Ivy.  And while she was there she heard back from surgery that Frankie was bleeding out. So it’s a never a moment’s rest for the parents. They’re children are swinging from one crisis to another.

It’s just too much for Cristina. She’s not at the top of her game quite yet.

Richard flew out to see Catherine. He wanted to give her a romantic surprise, but Catherine thought he came out to ask about Cristina. And it was only after she mentioned it that he did in fact ask.

Cristina won’t ever win the award. The reason that’s not an option for her is that she works at a hospital co-owned by the foundation. If she were to win – it would just look like a set up. So either Cristina leaves the hospital or she gives up on her dream. Because she can’t have both. None of the doctors at the hospital can.

Which is good news for Alex. He’s going into a private practice and Arizona is even there for him – supporting him. She thinks he’s great doctor and so she’s not going to be the one to hold him back.

Catherine was upset with Richard for being naive and Richard was upset with his lady love. He didn’t fly out to grill her over Cristina’s situation. He was going to ask her to marry him but now that’s over. He’s seen this other side to her and he realized he doesn’t want to be attached it for the rest of his life.

Back at the hospital, Cristina had a tough choice. The new heart that was supposed to be for Frankie ended up having to go to Ivy. Cristina was the one that made that call. She did so once she realized that Ivy could handle the transplant better than her sister.

But Frankie was too far gone to survive on a prosthetic alone. She died in the OR and her parents, who gave Cristina the choice to decide between their children, are quick to blame their doctor.

Owen found her in the shower fully clothed. He saw how low she was and couldn’t contain himself. He revealed to her what Richard just told him. He told her how she won and also how she could never accept her award despite being the best as long as she was attached to the hospital. So Cristina walked off to God’s knows where.

And as for Jackson, he came up with a list of suggestions. The board wasn’t happy about cutting research projects though they’re merely going to have to accept it.  Then he went home to find April collecting her ipod. She only returned to the apartment to get it and Jackson knew that.

Still, that’s didn’t stop him from trying to convince April to stay and discuss their problems. He said they needed to work it out and that they shouldn’t be fighting over hypothetical children. But the children aren’t hypothetical anymore – April told him she was pregnant.