BY Kristine Francis on May 1, 2014 | Comments: one comment
Related : Grey's Anatomy, Recap, Television 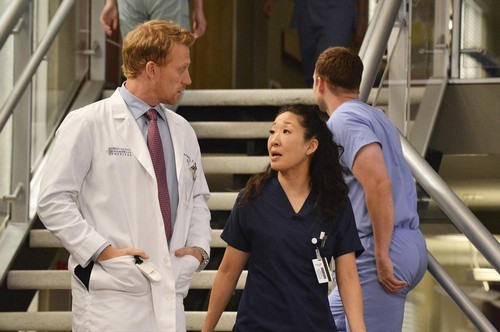 Tonight on ABC GREY’S ANATOMY returns with a great new episode. In “We Are Never Ever Getting Back Together,” Cristina seeks guidance from Meredith as she makes a decision about her future. Meanwhile, Derek and Amelia join forces to operate on conjoined twins; Jo takes on too many cases; and Stephanie uncovers the truth about Bailey’s bubble-boy case.

On last week’s episode the doctors received bad news from Jackson. Meanwhile, Amelia arrived in Seattle for an unexpected visit; Richard headed to Boston to surprise Catherine; and Bailey made a bold decision after growing disappointed with the lack of progress in her research.  Did you watch last week’s episode?  We did and we have a full and detailed recap, right here for you.

On tonight’s episode Cristina looks to Meredith for advice as she assesses her future at the hospital. Derek and Amelia work together on a difficult surgery involving conjoined twins. Meanwhile, Jo is spread too thin when she tries to work on several cases at once and Stephanie realizes the truth about Bailey’s bubble boy case.

This episode looks like it is going to be a great episode and you won’t want to miss it, so be sure to tune in for our live coverage of ABC’s “Grey’s Anatomy” Season 10 episode 22 at 9 PM EST! While you wait for our recap hit the comments and let us know how excited you are about the season so far.

Cristina was trying to put the Harper Avery award behind her, but the rest of the board won’t allow it. They’ve lost doctors since the secret came out. It seems no one wants work at the hospital knowing that it would also ruin any chance of them winning the award. So either Cristina contests her loss or the hospital might end up losing even more doctors.

Yet Cristina doesn’t want to contest anything. She feels like if she does then it makes her appear as if she’s desperate. So Meredith had a talk with her. Meredith reminded her that she won that award fair and square. And by this point everyone knows it. That’s why everyone admires her and that’s also why she was asked to speak at a conference in Zurich.

Meredith encourages Cristina to go to the conference. She’s hoping it would boost up Cristina’s flagging confidence. Meanwhile most of the doctors at the hospital were pulled in for a complicated surgery. The case revolves around separating conjoined twins.

Jackson is also on the case even though they he was left out of the board meeting. Not that the insult mattered much. He’s currently a bit pre-occupied with April and their baby. A baby is supposed to be a joyous event, but neither of the expecting parents felt like celebrating.

April doesn’t know what’s going to happen in her marriage so watching Arizona get excited about a theoretical baby is pretty tough. She wants that and can’t figure out how to get it.

Cristina went to Zurich after discharging the McNeil family. She knew they needed a break and so did she. Which is why she went to Zurich although she wasn’t expecting to run into her ex.

Preston Burke surprised her in the middle of the conference. It was he that arranged the whole conference to begin with. And when Cristina found out – she was pissed! It felt like he was finally attempting to make up for leaving her at the altar. But she wasn’t sure if she was ready to forgive. So she called Meredith for some perspective. What she got was rant on all of Burke’s worst qualities.

Back at the hospital, Derek is working with his sister Amy. Amy is a brilliant brain surgeon like he is yet it’s hard for Derek to treat her as his equal. She’ll always be his baby sister though he shouldn’t treat her as the incompetent sister at the hospital.

It led to Callie questioning if Amy was up to the job.

When Jackson found out that Richard called a board meeting without him – he confronted him. He made it clear that he should be invited to the next meeting, but Richard told him that the rest of the board regretted jumping into bed with his foundation. He said it was a marriage made in haste and they should have known it was going to fail.

Richard said all of this in front of April. She’s been thinking about what happen next and Richard might have given her an idea.

The surgery to separate the twins starts and while most of the doctors are in the Operation Room; Jo is left struggling to complete the rest of the tasks at the hospital. And she overextended herself. She had one patient in jeopardy and both Arizona and Bailey were demanding their patients’ test results.

Bailey’s patient is doing better. It really is a miracle seeing as without treatment he should have gotten only sicker. However he’s getting better and Bailey has a taken a zealous interest into what his latest results says. Could it be that she went ahead with an experimental treatment without her patient’s say so?

Jo left a patient in pain in order to take care of her other case and when she came back – the nurse had to be the one to inform that Owen took charge. In the rush to complete all her tasks, Jo nearly killed a patient and Owen was forced to take her to task. They were several attendees available she could have asked for help and still she risked a patient to prove a point that she can take care of herself. Well, she can’t!

She needed Alex to calm her and he was busy at his new job.

The surgery on the twins took an unexpected turn. There was an agreement that if anything went wrong then all the resources would go to one of the twins. But the plan changed during surgery. It was Derek’s twin that was failing while Amy’s patient that was able to survive the separation.

Derek was miserable about his case, but he did see Amy’s potential. And with the way doctors are jumping ship – he asked her to consider working at the hospital as their newest addition.

In Zurich, Burke showed Cristina his new facilities and the imaginative new projects his team is working on. He did this in order to tempt Cristina into taking a job there.

She thought this was a ploy to get her back and it wasn’t. Burke has gotten married and started a family since they last met. So he doesn’t want her nor does he want her to work for him. Instead Burke wants to hand over his hospital to Cristina.

His wife wants to live closer to her family and he feels that she made enough sacrifices for him. And Cristina wants that job. Meredith had to only look at her face at the airport to know that Cristina was going to take that job no matter what.

Although Richard won’t be pleased to hear it. He blamed Catherine for ruining the Harper Avery Award. He felt like she tainted it and he took out his aggression on Jackson. He would have kept on trying to beat up the other man if April hadn’t intervened.

She defended her husband and Jackson saw how much faith she had in him so he decided to return the favor. He’s going to go to church with April. Jackson feels like it’s the least he can do.

They have a marriage and they want to make it work. Cristina had a similar marriage and still she couldn’t make it work with Owen. But once he hears about the Zurich offer – will Owen keep trying to fight for Cristina?

As for Bailey, she used the HIV virus to give a little boy an immune system. Will she ever take the credit for it?