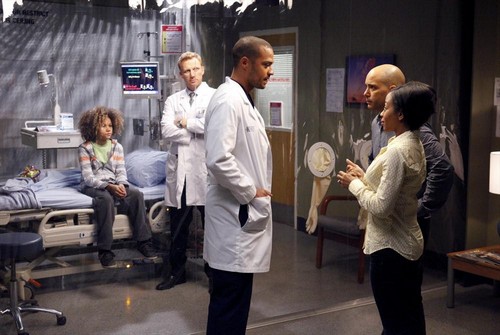 Tonight on ABC GREY’S ANATOMY returns with a great new episode. In “Everything I Try to Do, Nothing Seems to Turn Out Right,” Amelia opens up to Meredith about her time in Seattle. Elsewhere, bad news is delivered to Callie; Bailey faces the consequences of her actions; and the residents are alarmed to hear that one of them will soon be out of a job.

On last week’s episode Cristina looked to Meredith for advice as she assessed her future at the hospital. Derek and Amelia worked together on a difficult surgery involving conjoined twins. Meanwhile, Jo was spread too thin when she tried to work on several cases at once and Stephanie realized the truth about Bailey’s bubble boy case.  Did you watch last week’s episode?  If you missed it we have a full and detailed recap, right here for you.

On tonight’s episode with Derek away, Meredith spends time with Amelia and finds out her true feelings about her time in Seattle. Bailey deals with the ramifications of her actions and Callie receives devastating news. Meanwhile, the residents panic after hearing that one of them will be fired.

This episode looks like it is going to be a great episode and you won’t want to miss it, so be sure to tune in for our live coverage of ABC’s “Grey’s Anatomy” Season 10 episode 23 at 9 PM EST! While you wait for our recap hit the comments and let us know how excited you are about the season so far.

Tonight’s episode of Grey’s Anatomy kicks off with Derek and Meredith video-chatting. He reveals to her that he is cancelling the surgery they have scheduled together and he will not be returning yet.

Meanwhile at the hospitals the residents are panicking over which one of them is going to be fired. Leah is stress eating and shoveling hamburgers down her throat and Jo’s entire body is covered in hives.

April and Jackson rush out of the gynecologists’ office giddy with joy over their sonogram, they still haven’t told anyone that she is pregnant though.

Bubble Boy Brayden is healed and ready to go home, but first Bailey has to reveal to their parents that she used a strain of HIV to heal him against their wishes. Cristina high-fives her for her efforts, but the parents don’t take the news as well. Bailey sits down with the hospital’s lawyer and informs him she didn’t make a mistake, and she stands by her decision to go against the parents’ wishes.

Weber selects Leah to work with him on a patient that has a damaged rectal, they put in a rectal pace-maker but it doesn’t seem to be doing it’s job. She is still going to the bathroom every four hours. While they are speaking to the patient Leah burps ridiculously loud from all of her cheeseburgers. Weber is furious, he tells her to take an antacid, and says Dr. Warren is in charge now.

Alex pays the hospital a surprise visit to check on some of his patients, he swipes Shane’s tablet full of patient info and rushes off.

Amy is less than thrilled when she learns that she has to cover Derek’s surgery for him, she snaps on Meredith.

Cristina is busy interviewing potential replacements for Dr. Russell, and looks bored out of her mind.

Shane finds Alex in with a patient scheduling his surgery. Alex orders Shane to transfer the papers over and have the patient’s parents sign them so that the patient can be billed by his practice. Shane doesn’t want to go along with his scheme, but Alex twists his arm.

Cristina informs Owen that all of the applicants are duds. He informs her that “they can’t all be her.”

Leah is back in with the rectum patient. She is shocked to learn that her patient lost her job as a professional dancer because she couldn’t control her gas.

Arizona is fuming when she learns that Alex and Shane stole her patient. She informs him it was a “jerk ass move.”

Edwards spills the beans to Warren about Bailey’s legal woes. Warren rushes to Bailey and Owen joins them and informs them it is serious. The parents are pressing charges against Bailey and she is facing a malpractice suit.

Alex and Shane are performing the surgery on the patient that he stole. Arizona marches in and kicks Shane out. She informs Alex that she is going to assist him.

Amy and Meredith bond over a patient. She confesses to Meredith that she never wants to leave the hospital and she is happy here.

Leah has an idea to help the rectum patient, and she pitches it to Weber. She wants to install a magnetic rectum in the patient to keep her rectum close. Weber approves and the patient agrees to try anything.

Shane is in the NICU sulking and applying medicine to an infant’s intestines, he was born with all of his intestines on the outside of his stomach. The baby’s intestines begin rupturing and Shane tries to hold them together and calls for help. Arizona rushes in and takes over and tells Shane to “get out!”

Jackson runs Brayden’s lab test to double-check Bailey’s work and reveals to his parents he is ready to leave the bubble. Owen watches from a distance as Brayden races into his parents’ arms for the first time in months. Brayden’s Dad declares to Owen that Bailey will never practice medicine again when he is done with her. Stephanie steps forward and lies to Brayden’s parents and declared she is the reason they gave Brayden the HIV treatment. Stephanie informs them that she forget to tell bailey they changed their mind about the HIV treatment. Brayden asks his Dad if he can just go home.

Weber lets Leah insert the magnetic rectum into the patient. He stands over her and instructs her on how to perform the procedure.

April confesses to Callie that she and Avery are expecting a baby. Callie bursts into tears and reveals to her that she went to her doctor and found out she can’t have any children.

Bailey is livid when she learns that Stephanie lied and covered for her. Owen reveals to them that Bailey is no longer getting fired, and Stephanie is only facing a week’s suspension.

After Leah performs her surgery successfully he takes Leah aside and tells her that she doesn’t have what it takes to be a surgeon. He thinks she should stick to research and he has set up a job for her at a friends of his’ clinic.

Alex pays Arizona a visit and apologizes for poaching his patients. He confesses that he is “drowning” at his private practice. He didn’t have any patients coming in and he is losing money. She informs him that next time he needs help he needs to come to her and ask for it.

Bailey sits down with Warren and apologizes to him for hiding what she did form him, she explains that she took a “virus that kills and turned it into something that heals and he save his life.” Warren isn’t upset anymore, he understands.

Stephanie, Shane, Jo, and Leah are getting dressed to leave. Stephanie, Jo, and Shane are still stressing over which one of them will be fired. Leah reassures them they will all be fine, they have no idea she has been let go.

Owen checks with Cristina and she informs him that any of the potential interviewees would be just fine to take on Dr. Russell’s position. Owen confesses to her that he wanted to ask her to stay, but he knows nothing good will come of it, so he promises he won’t. And then he kisses her.

The episode closes with Derek finally returning home. He announces to Meredith that he met the President in Seattle and he offered him a job at NIH in Washington, DC and they have promised to have a position for her at the local hospital. He reminds her that all of her friends are moving on and she should too.